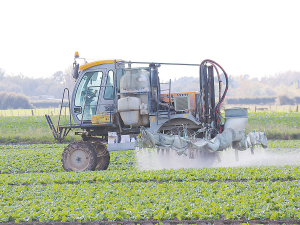 This is the finding of scientists conducting the first nationwide survey on resistance. Instead of the expected 5%, they've found more than 50% of the arable farms and vineyards surveyed have weed strains resistant to commonly used herbicides.

AgResearch senior scientist Dr Trevor James called the results "very surprising". He says when the researchers put their funding proposal together three years ago they thought the worst case scenario would be finding resistant weeds on just 5% of farms.

However, out of 87 Canterbury arable farms tested, 54 were found to have a resistant weed. Results for glyphosate resistance in ryegrass in Marlborough vineyards has also shown more than 50% with a resistance problem, James told Rural News.

This year they have also sampled Southland, Waikato and Bay of Plenty maize fields.

"We've got a lot more testing of samples to do yet, but to date what we're finding is a lot more serious than what we originally estimated."

The programme, funded by the Ministry of Business Innovation and Employment and supported by the Foundation for Arable Research and the NZ Winegrowers-owned Bragato Research Institute, involves germinating weed seed samples and seeing how susceptible the plants are to various common weedkillers.

Herbicide-resistant weeds were first detected in New Zealand in 1979. However, until recently, reporting has been ad hoc and left to growers and rural professionals to recognise and alert researchers.

Asked why the extent of herbicide resistance has not been apparent prior to the formal survey, James explains that a farmer might not consider it a problem.

“As long as there is a herbicide available, albeit more expensive, that works on a particular weed,” he says. “But overseas data shows eventually we run out of herbicides.”

James says Australia has among the worst resistance problem in the world. That country now has a grass weed – rigid ryegrass – which is resistant to eight or nine different modes of action; so essentially nothing can control it.

Meanwhile, James says New Zealand’s small size makes it unprofitable for some companies to sell some herbicides here, which gives us potentially an even greater problem.

“In vineyards, if they lose glyphosate, they’ve got glufosinate – which is more expensive. Or clethodim, which they’ve got to get permission from New Zealand Wine to use,” James told Rural News.

“Evidence from Chile demonstrates that if you start using clethodim regularly in vineyards, it’s only about four to five years before ryegrass becomes resistant to that.”

Should we be worried?

“We need to get the message out there that this is, if not serious now, very soon will be if we keep on having resistance emerge as it has.”

Testing involves collecting mature seed from weed species at the end of the growing season. It is then put it in a coolstore for a while to break dormancy, then grown in pots. The plants are then sprayed with various common herbicides to see how well they work.

“You can see that takes quite a long time,” James told Rural News. “Which is why we’re only assessing samples now, which we collected in January, February and March.”

One thread of the research project is developing quicker methods of testing, possibly by analysing DNA or growing test seeds on agar.

James says the researchers are also looking at sociological factors around farmers' decision-making - given that herbicide resistance has been known for some 40 years and farmers have been advised to use methods like rotating chemicals to avoid it.

"We haven't been successful to the point where we have stopped the evolution of resistance because we are getting more and more of it," he adds.

"So, we've got sociologists looking at why and how farmers make decisions to rank importance of the various problems they have, because we all know farmers have to make huge decisions on a daily or weekly basis that will impact their farms, so this is just one of many."

Another thread of the research is collecting and analysing overseas data for indications to see which weeds may be likely to develop resistance in future. Or which chemicals might lose effectiveness, in the New Zealand context.

They are also looking at non-herbicide intervention - such as cover crops to manage resistant weeds.

James says they are now starting to work with arable farmers, the ones initially appearing to be worst affected, to formulate farm-wide or system-wide methods to avoid herbicide resistance.

"We don't believe enough anymore, for a few scientists to get up and say 'thou shalt do this, and you shouldn't do that'," he adds.