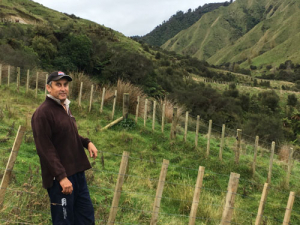 ...or indeed a wrath on the communities and farms all the way down to the sea.

He’s tapped into the South Taranaki and Regional Erosion Support Scheme (STRESS) to allow him to reap more of the potential of his 2000ha Waitōtara Valley property – while ensuring its soil does not erode into waterways where it degrades water quality and heightens the risk of downstream flooding.

Pearce has fenced off and retired steep slopes and planted poplar poles in others areas with assistance from STRESS, one of a number of Sustainable Land Management programmes administered by the Taranaki Regional Council as part of its work supporting livelihoods and improving lifestyles.

About 1600ha was grazed before about 100ha in different blocks was retired under stress. Much of this was already starting to revert because of its unsuitability for pasture, or made up of natural gorges and riverbanks. And about 500 popular poles were planted last year in areas where erosion was prevalent but fencing-off was impractical.

“I liked the idea of having some marginal areas fenced off and retired for several reasons,” Pearce says.

“One is to help prevent erosion on steeper faces and near waterways.  Allowing natural regeneration, along with some strategic planting, helps prevent slipping by increasing ground cover and root structure. It’s also beneficial to have unsafe areas for livestock fenced off and stock excluded, as well as being of ascetic value to the property over time.”

The work has also opened up opportunities. He’s already diversified into beekeeping for manuka honey production, and sees the possibility of earning carbon credits for his retired areas and poplar plantings.

The benefits don’t end there.

“With the STRESS areas retired, we can concentrate on improving fertility and production on the more productive land,” says Pearce, who has maintained his stock numbers at 4000 Romney ewes and 500 Angus breeding cows, with brassica crops and regrassing to finish lambs and bulls.

“Generally, maintenance on STRESS areas is low and we can still use access tracks through them.”

He says the retired areas have been beneficial in creating natural buffer areas between blocks and next to waterways. “In general, I think the retired areas will add value to the property over time, with the benefits of soil conservation and ascetic value as they grow into substantial native bush areas.  They’re also great for the native bird life!”

Pearce’s efforts demonstrate that a sustainable land management approach is a winner in the hillcountry, says the Council’s land services manager, Don Shearman.

“It really does sustain the land – as well as the environment, and as well as the livelihoods of farmers like Roger,” says Shearman. “The bottom line is that without soil, you can’t grow grass.

“And the impact of hillcountry erosion has already been seen in major flooding events, while the sediment also degrades the health of waterways. Freshwater quality has become an increasingly important priority, regionally and nationally, so doing the right thing, as Roger has, is in the interests of farmers themselves as well as everyone else.”