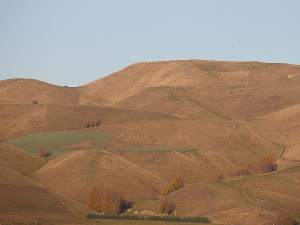 Hawkes Bay farmer Mike Connor reckons the region is going through a similar pattern to what happened in the 1980s when it went through an extended dry phase for a number of years.

That's how bad the drought is in Hawke's Bay, according to Mike Connor who, along with his brother Peter, runs 1,000 one-year-old bulls and a further 1,000 two-year-old bulls across four farms in the Crownthorpe area, west of Hastings.

He told Rural News the last two years have been the most challenging time he's experienced in the 15 years he's been working on the farms.

Connor says they have fared slightly better this year over the previous season, but adds that it's still been difficult keeping their operations going the way they want to.

One of the farms is located at Omapere, and of the 250 hectares on that farm, 150ha is irrigated by water from the nearby Ngaruroro River. As well as running bulls on this property, the Connors also grow 20ha of sweetcorn for McCain Foods and this forms part of their re-grassing policy. The other farms are further west - towards the Kaweka Ranges at Sherenden and Otamauri.

The brothers also graze on a further 200ha. The farm at Omapere, where Mike Connor is based, was bought by his great-grandfather in 1908 after he emigrated from Ireland.

He says they are lucky given they have irrigation on Omapere. Last year, even that was far from the solution because for 65 days they were not able to irrigate due to low flows in the Ngaruroro River from which they take water. This year it’s been better with only 21 days when water has been unavailable to them.

Looking back at the past records, Connor says the present situation appears to be similar to what happened in the 1980s when the region went through an extended dry phase for a number of years.

“Back then the Havelock Hills were brown by show week and it seems like we are seeing this again,” he told Rural News.

“We have had little bits of rain and, while that helps, the value of that soon disappears. But despite the fact that soil temperatures are still relatively high and any rain would help, the reality is that on the unirrigated areas, the pastures that have not been re-grassed in recent years have exhausted themselves and the chances of a recovery – like we had this time last year – is not as great.”

“On the dryland hill country the grass has a certain amount of reserve, but eventually that gets exhausted and that’s what we are seeing,” Connor explains. “It was exhausted last year and now it’s happening again and I think that’s one of the big step changes we are seeing.”