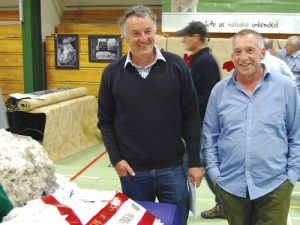 Entered in the fine fleece category, his 18.8-micron Merino fleece was scored at a hard-to-better 99 out of 100. All the more remarkable, in a competition where fleece weight is one of the criteria, for having come from a hogget and being blade-shorn – which leaves more wool on the animal.

It's the first time a hogget fleece has won the overall Golden Fleece title.

Murray runs about 5500 Merinos on his 4500ha Maryburn Station, having converted from halfbreeds about 1995. His fleeces have won at the Mackenzie Show three years running, but this is his first success at what is effectively the national title.

Just as proud a winner was blade shearer Steve Bool, of Mike Bool Shearers, who had shorn the winning fleece and accompanied Murray to the event.

Run by the Royal Agricultural Society, the Golden Fleece Exhibition is in its 46th year, hosted by various A&P associations on a two-year tenure. This was Oxford's second year and in 2017 the event will go to Wanaka.

This year was the first time black and coloured wools were included, the top fleece in that category coming from JD and ML Stewart, of Rakaia.

Rachel Humphrey of Feilding won the strong wool category, scoring 96 for a Romney hogget fleece. RAS chief executive Debbie Cameron said all events so far have been held in the South Island, being what she called the "stronghold" of New Zealand's wool production.

Cameron said the event was growing. Oxford attracted about 170 fleeces last year and at least 190 this year. She says top fleeces often scored 96 or 97, but Martin Murray's winning fleece had to have been "exceptional" to get 99.

He says in the strong wool section, there were some exceptionally good fleeces but others were "dusty", obviously showing the effects of a couple of hard, drought years.

"You see quite a lot of dirt in the tips [of the fibres], and that's really because there's been little grass and lots of dust blowing around. But that doesn't affect the fleece itself and the fibre. It'll still scour out. But some of the fleeces are probably not quite as good as they can be, or have been in the past."

Meanwhile, Cochrane believes the wool industry is in a better shape now than in 10 years.

"The number of sheep has come down, as the dairy industry has grown. So there are fewer sheep and the quality of the sheep that are left is pretty good.

"In the past, we have often had stockpiles of wool that's been unsold, whether it belongs to the grower or a merchant or exporter. We haven't got that anymore," he says.

"The only threat to the sheep industry is that the meat value is not high enough. If the meat value grows and wool carries on where it is now, that combination is pretty good."