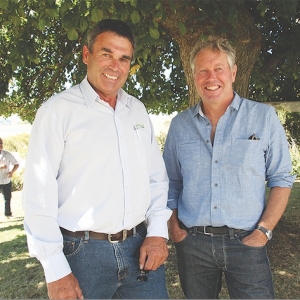 That’s the response B+LNZ hopes to see among diners in Germany, promoted by the tour they organized for the four Michelin-recognised German chefs.

Their tour included a visit to a large Maori farm, a processing plant and farm that supplies the German market and a meeting with other top chefs in New Zealand.

B+LNZ emerging markets manager Nick Beeby said, “It’s to create a story behind NZ Lamb, so when these guys go home they can talk about their experiences to other top chefs in Germany and explain to their customers why our product is so special; they can relate the passion we have as farmers.”

B+LNZ wanted to impart ‘pride in our produce’, ‘care of the land’ and ‘understanding the people who work and are part of the land’.

Chef Martin Scharff said, “You have an excellent product but I didn’t realise what natural conditions your lambs are grown in. It is important we see it directly so we can pass it on. What you have is inspiring.

“It has been great to see the culture and the people and learn more about the food that comes from New Zealand.”

Chef Christian Mittermeier, also an hotelier, (Villa Mittermeier) and a writer for national weekly newspaper Die Zeit, was familiar with NZ lamb and praised it for its consistency, “It always has an excellent taste and texture.”

However, he said, people in his country ate lamb mostly from Germany and France.

“The consumer likes to know where their food comes from and wants to be able to trust the producer.”

He was impressed at how big New Zealand farms were compared to those in Germany and the level of cooperation between farmers. “This system is better because it leads to success.”

B+LNZ hopes the chefs will be impressed and inspired by conditions NZ lamb is grown in and promote this message at home.

While the promotion of NZ lamb in Germany is progressing well, increased competition from Welsh, Irish and English producers is a continuing challenge. On-going promotion is needed to maintain New Zealand’s dominant market position and preferred-supplier status in Germany, BL+NZ says.

It is boosting promotion of NZ lamb in German stores by shopper tastings, and via social media and public relations.

The initiatives are timely in premium markets, says Mark Harris, B+LNZ extension manager, eastern North Island. “Now that more of our lamb is going into Asia, especially China, the competitiveness for NZ lamb is getting higher. This is good for us as farmers and should push the price up.”