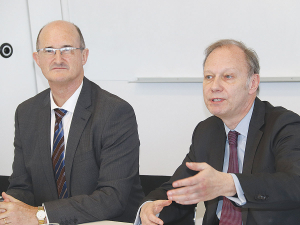 European Union and New Zealand trade officials are still hopeful that agreement on a free trade agreement (FTA) will be reached by the end of the year.

About 30 EU negotiators and a similar number of NZ trade officials had another round of talks in Wellington last week. However, both sides admit that the political desire to sign a quality, comprehensive agreement by year end is “ambitious”.

Last week, both sides held a public briefing in the capital for stakeholders. All the main primary sector organisations attended and many questioned the two chief negotiators – Martin Harvey from NZ and Peter Berz from the EU.

Harvey says both sides are motivated to complete the negotiations. They agree on a lot more things than they disagree on.

Berz described the negotiations so far as very constructive with neither side trying to impose its views on the other.

Obtaining a quality FTA would hugely benefit the primary sector if tariffs were lifted and greater free trade was enshrined in a deal. But the EU negotiators have frequently pointed out that the farmers of Europe also have an interest in the FTA and some tough sensitive issues are still clearly not resolved in the discussions to date.  Market access for agricultural products remains difficult despite the global trading environment for agriculture having changed hugely.

Notably, the EU is now the biggest global exporter of dairy products – bigger than NZ. Some European cheeses are on the shelves in NZ shops.

Given this foray by the EU into the global dairy export market, it seems illogical that the EU continues to subsidise its farmers. This issue is sure to be raised by the negotiators if it hasn’t already.

Food safety and sustainability, including the environment, are likely to feature prominently as the talks go on.

The provenance of NZ’s food exports aimed at the top end of the consumer market will have implications onfarm given the issues of how NZ deals with greenhouse gases and climate change. The power of the consumer is now being realised.

One of the sticking points in the FTA negotiations is geographic indicators (GIs). An example of a GI is the name given to a particular style cheese such as Gouda which is linked to a specific town or region in a country. The question is what – if any – restrictions the EU may place on NZ using a name such as Gouda.

Both Harvey and Berz say GIs, and all the other agricultural issues, are currently being worked through. However, as they have said before, these may be the last elements of the FTA to determined.