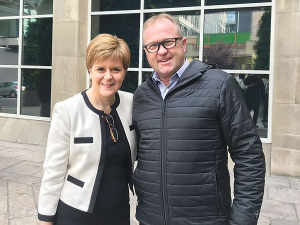 The escalating trade war between the US and China will impact NZ trade, warns special agricultural trade envoy Mike Petersen.

He says it no longer rings true that, as some New Zealanders are saying, there’s nothing to worry about because the trade war is between two world super powers.

“Yes, it is directly between the US and China and yes, generally we are sliding under the radar and managing to grow our international trading opportunities as we speak,” he told the recent DairyNZ Farmers Forum in Rotorua.

“Just remember all these things have consequences.”

“President Trump says farmers are struggling under the tariff war that he started.

“Hey, this is everything that’s wrong in the world of international trade. I call it aid for a self inflicted wound.”

The US is beginning to be flooded with farm produce as Chinese retaliatory tariffs begin to bite. For example, the Trump administration is buying milk from farmers and putting it into aid programmes.

“President Trump thinks he is going to solve the world’s hunger problems by buying milk off their farmers and dumping it in international markets,” says Petersen.

Export of US soy to China has almost ground to a halt, Petersen notes.

“Where is that soy going now? It is being dumped on the livestock feed market to produce more milk. The US is one of the few areas actually growing its supply of milk largely on the back of cheap feed.

“All these things have consequences and we need to work really hard in NZ to try to make sure we remain relevant in this world where these geopolitical powers are having massive games around trade.”

“We have a fixed amount of land and there’s growing environmental pressure. It’s not about more animals but more value and more profit from what we are doing today.”

Petersen brushed off concerns about plant based proteins.

“I’m not concerned about plant based proteins. Let’s focus on ourselves rather than the opponents -- as the All Blacks do.”