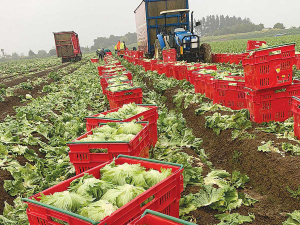 Growers are warning consumers to brace for significant price increases for vegetables.

The growers are also telling consumers to brace for significant price increases for vegetables, strawberries, stone fruit, cherries and watermelons.

Bhana told Rural News that his company hires around 30 extra workers, mostly from the Pacific Islands, every year for harvesting and pack house duties.

With no overseas workers available due to Covid border closures, the company had placed job advertisements on Trade Me and the Ministry of Social Development websites for locals. The response was very poor, he says.

Bhana says this season’s lettuce crop is ready for harvesting.

“We don’t use machines; the lettuce is hand cut… we can’t leave the lettuce in the ground for too long as they would over mature and rot.

“This will then lead to prices of vegetables increasing because of the losses.”

Bhana cannot understand why the Government isn’t allowing overseas workers in. “They are allowing rugby players and film makers. It seems very unfair.”

Fourteen major growers and distributors say in a joint statement that they are now “in crisis” and are calling for action.

The growers say “time and time again” they have told the Government of their predicament around worker shortages.

However, they claim nothing has changed just because more people are out of work.

“There is such a shortage of people available for horticultural work that there will still be plenty of work for New Zealanders in the roles they prefer (those that offer flexibility in work hours for example).

“However, without having a core experienced staff of overseas workers the crops will not get harvested outside and there will not be work for New Zealanders.”

The growers say because of the Government’s “intransigence”, early harvested crops will soon be rotting in the ground and prices will skyrocket due to lack of availability.

“Export markets will be lost as our direct competitors, Australia, are currently recruiting overseas workers as they normally would.”

No pass, no entry

New Zealand Young Farmers (NZYF) has announced that My Vaccine Pass will be compulsory for all wishing to attend FMG Young Farmer of the Year events.