Why are goat profits not matching prices? 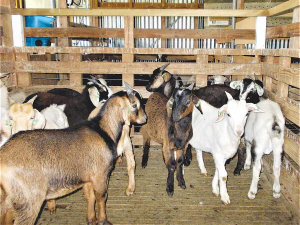 The goat schedule has been remarkably stable over the years, despite exchange rate shifts, shipping cost increases and various market changes.

However, individual processors schedules may not be directly comparable with freight subsidy differences, North/South Island location and market needs. The domestic fresh market – that only consumed 3% of the inspected national kill in 1991— now takes one third, mainly in Auckland. That requires regular slaughter from fluctuating and seasonally influenced supplies, whereas the frozen export market product is not so affected.

Farmers, who want to compare goats with lambs, suggest that farm production and market differences are not appreciated. Nor that overall FOB goat meat export prices have generally matched lamb prices over the years.

Compared with goat, sheep meat schedules include wool and pelt payment as well as by-product returns, that are not specifically included for goats and make schedule comparisons more difficult.

Fluctuating goat skin values have also a disproportionate impact on lower per kg meat value to influence per head values. Consequently, farm gate returns for lamb and mutton were about two thirds of FOB values – whereas goat was about half.

Another influence is increasing weight – where a relatively flat goat schedule from 8-20 kg does not match the steep lift from 13kg for lamb.  Goat and lamb meat may not be comparable for western tastes. Consumer preferences suggest a better sheep meat quality comparison, in NZ farmer terms, would be with lightweight mutton – where similarly flat schedule values are three quarters of lamb. Given goat grazing nature and their on-farm role, an even better comparison could be with lightweight bull and cow beef.

At the pastoral farm production and management level, goat meat is more comparable with mutton, bull and cow beef. This is because goat carcase quality, age and sex are usually not market specifications, with weight being the major influence on farm gate returns.

The industry average 11-12kg goat schedule – on a scale of 100 – can be compared with NI summer schedules for lightest weight grades Cow 31, Bull 78, Mutton 77 and Lamb 117. Yet, FOB comparisons can also show a premium for goat over those other meats.

• Garrick Batten is a former agricultural diplomat and MAF regional manager of advisory and technical services. He was the developer of NZ Kiko meat goats now popular in USA and a pioneer of  dairy goat farming, stud master for leading cashmere flocks and industry life member.

Processing issues with goats, but problems not insurmountable

Why have processor/exporters not encouraged more goat meat when it sells at comparable retail prices to lamb in USA?