Woke crowd a challenge for meat 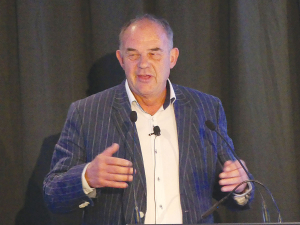 Meat consumption has dropped 20% in continental Europe and the UK in the last two-three months and it’s not all due to the summer heat, says the NZ red meat sector’s man in London, Jeff Grant.

Calling it “the biggest issue in front of us,” Grant refers to underlying changes in attitudes to eating meat.

He told a recent red meat sector conference in Christchurch that an Oxford University report had essentially said if you want to save the planet, stop eating meat.

This was the main topic of general conversation he heard while “sitting in the pub in Kensington”.

“They genuinely believe they have to do something,” Grant said.

He says “sticky times” lie ahead and the meat industry must collectively address consumers’ attitudes.

The UK and Europe is a mature market with not a lot of growth in it, so “we should be thankful for North Asia,” he said.

Grant says consumer patterns are continuously changing, eg new apartment blocks are being built in London with only kitchen microwave ovens, and a lot of food is bought ready to eat.

Only 0.5% of UK are vegan and 5% are vegetarian, but 7% are ‘flexitarian’, ie they eat two meat meals a week, but that has come from zero in five years.

He says the UK is trying to get out of “what can only be described as a bugger’s muddle”.

“The lovely thing about Brexit is that you can predict anything about what the model might look like going forward and you’ve got about a 50% chance of being right,” he told the conference.

“There are no experts on this because it has changed every day and every week.”

Johnson has strongly argued for a no-deal exit.

“I’m not saying this is a good or bad thing, but we’ve needed a circuit breaker of some kind and, looking at the candidates, Boris was the one who looked most likely to be [the circuit breaker].”

No deal will be brutal

The impact of a no-deal Brexit will be brutal for the UK meat industry, Grant says.

Johnson’s new minister in charge of Brexit planning, Michael Gove, has said the market would be propped up in some way, but Grant had been unable to find out what that might mean, and any regime would have an impact on prices.

A fundamental issue is the Irish backstop, Grant says.

Under the Good Friday peace agreement there were 320 border crossings between Ireland and Northern Ireland, with no physical controls, and nobody wanted to put the border back up.

About 330,000 tonnes of Irish beef goes annually to the UK. Under a no-deal Brexit it would be subject to tariffs, but Irish beef farmers know they could illegally dodge the tariff by taking it into Northern Ireland across the uncontrolled border.

“They will, in my view, find ways to shift product around,” Grant says.

“There will be delays at Dover. There will be chaos during the initial period but eventually for our industry it will get better.”

Meat processing back to normal soon

Farmers are hoping that processing capacity at meat plants will return to normal within a month.