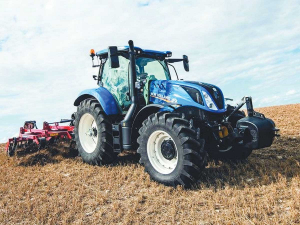 At the recent launch of the New Holland T7 HD Series in Europe, the company spoke of their commitment to ‘Agriculture 4.0’

At the recent launch of the New Holland T7 HD Series in Europe, the company spoke of their commitment to ‘Agriculture 4.0’ – a term that is been creeping into the world of agricultural technology for the last couple of years.

But what exactly is Agriculture 4.0?

While there is no precise definition yet, it appears to be the new buzzword or general umbrella for tech-driven developments that will see users depart from what might be considered current day practise.

The term’s origins seem to have been a report from The World Government Summit – a global think tank based in Dubai that describes itself as “a global, neutral, non-profit organisation dedicated to shaping the future of governments”.

Its report Agriculture 4.0, published in 2018, promised to: “deliver breakthrough impact through collaboration”. The report suggested that because very little innovation had taken place over recent years, the need to feed future generations had become urgent and was a reason for disruption. The document goes on to outline what it believes to be the major underlying issues that are hindering world food supply.

Those issues obviously include a burgeoning population, reducing natural resources, climate change and food waste in the production and utilisation sectors. Whilst the first part of the analysis seems wide of the mark with regards to innovation, there is indeed a reality emerging with respect to global food shortages.

The report calls for a fourth industrial revolution, powered by an almost total reliance on digital technology— a hypothesis that has raised many important questions in academia.

Those academics point out that a major revolution had already taken place, not least with automation in agriculture, with examples of robotic milking that have been around for more than a quarter of a century and the widespread use of GPS in the last decade or more.

Interestingly, they also note that despite the talk of robotics bringing production gains over a similar period, the technology is still relatively scarce on commercial farms.

The initial report also looks at areas that will be an anathema to many contemporary farmers with terms such as artificial meat, ‘vertical farms’ in warehouse-style buildings, hydroponics, seawater farming and algae-based foodstuffs all being touted as possible solutions to food shortages.

It goes without saying that most of these “potential” solutions would take the base of food supply away from farmers, probably into the hands of large food corporations with enough capital to finance their implementation. This has the potential to concentrate the food supply chain to a small group of wealthy corporations, which could possibly use that supply chain power to push up prices as they saw fit.

Drilling deeper into the report, as to what it means for today’s farmers, it is a little light on detail. It just regurgitates words that have been around for a decade: such as connectivity, the Internet of Things (IOT) and a recurring theme about automation.

The latter point has managed to raise the eyebrows of a research group at the university of East Anglia in the UK, which notes, “while smart technologies such as artificial intelligence, robotics and the IOT could play an important part in the role of achieving enhanced productivity and greater eco-efficiency, critics have suggested that the social implications of these moves has been largely side-lined or ignored”.

The group goes on to call for a more systematic and considered approach for the implementation of digital technology.

They also suggest that the “disruption” called for in Agriculture 4.0 appears to bring with it the sudden or uncontrolled displacement of farm staff for the sake of high tech-implementation. Although this is an unlikely scenario, given most farmers conserve nature.

In summary, given that Agriculture 4.0 is centred around food growing practices with little consideration for current farm practices, it’s not clear to this writer what benefits tractor and agricultural machinery manufacturers may hope to gain by being associated with the report.

Of course, improved farm management through the likes of yield mapping and variable inputs are well within the realms of modern machinery, but little else in the report appears to consider current agriculture.

In the case of manufacturers, some are obviously buying into the buzzword of Agriculture 4.0 while others are choosing to give it a wide berth.

Of course, growing more food with fewer resources is laudable and a task that can be done in many ways. However, which way is the best— only time will tell!

While it seems increasingly common to see ‘black editions’ of many tractor brands – or as with one Scandinavian manufacturer, a plethora of colours – it’s not so common for the New Holland brand.

CNH and MacDon team up

In a move that is expected to have a significant impact in the New Zealand farm machinery supply sector, CNH is taking over importing and the distribution of its Case IH and New Holland tractor brands.