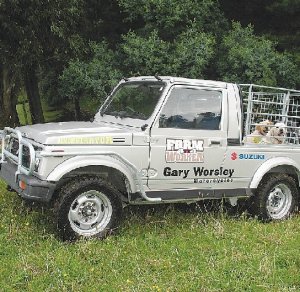 ANYONE WHO had an old Suzuki SJ410 or SJ413 – or even a Land Rover – will relate to this version of Suzuki's offering to the New Zealand market. Built in India, the Farmworker is a 'descendant' of those early Suzuki's that were a cheaper go-anywhere 4WD much favoured years ago by Kiwi farmers.

The Farmworker comes in three body styles, the cheapest a canvas roofed wellside version (Versatile), a fiberglass roof model with wellside and a flat-deck version – the flat deck built here in New Zealand.

The model we had on test, the wellside, came with accessories such as seat covers, heater, crate, towbar and bull bars. Lots more can be added, such as half doors and power steering, as they come billy basic and can be specced to what you require. The first thing I would do is throw out the carpet on the floor and put in some decent rubber mats along with the underseal option.

I didn't find the manual steering too heavy, and it gives better feedback in a 4WD situation. The heater has all the controls on the dash, but the actual heater is extra. On the model tested, the roof comes off by undoing eight bolts, leaving the roll bar, then the screen can be folded down; this will appeal to the hunting types.

The billy basic model with the canvas roof and ordinary road tyres retails for $13,995 including the God Save Taihape tax. Compare that to a 400cc quad, and for an older farmer it could be another option. Even the model we tested at $18,990 is only marginally dearer than a big quad, and for all intents and purposes, more useful. Also it has a roof to keep you dry, and if required the radio and heater to keep you entertained and warm.

The fuel-injected 1298cc engine develops 80hp (60kW) and 103Nm torque at 4500rpm, but provides the Farmworker with adequate power and performance.

This reviewer found the gearing higher than he remembered in the vehicles of old, but then, is this because it is geared for road conditions in its country of origin? Even in first gear, low range in the transfer box it felt high-geared in steep terrain, but to give the machine its due, it was prepared to lug a bit, and I'm told they get better with a few clicks on. My test machine had only done 200 kilometres.

The flat-deck and wellside models come with the excellent Maxxus tyres, which provide sure contact with most surfaces, but a replacement set will set you back about $1200. There are no fuel economy figures quoted, but the 40L fuel tank will provide plenty of hours of use. It can't be any hungrier than a big quad.

I found lots to like about this machine that weighs less than a tonne. For the money, it beats a UTV and I'd expect running costs to be less. The ability to tow 500kg as well as put 500kg on its deck is a bonus as well, and we all know that Kiwi farmers abide by the manufacturers recommendations when it comes to towing and loading.

Being cart sprung (leaf springs front and rear) may not give the best ride, but at least we know this system is durable, and our farm tracks would probably mimic roads in India. I found the Farmworker a capable and stable offroader; for most people, it will take you where you wish. Suzuki offers a good two-year warranty.

The main drawback is because it doesn't have compliance it can't be road registered, but for dedicated on-farm work, I'd take a look.

no electronics to go wrong, cheaper running costs probably than

At Fieldays will be the DR200 Trojan, a benchmark farm two-wheeler motorcycle since its introduction 23 years ago.

The latest, fourth-generation Jimny “takes the best of the three previous generations and brings it bang up-to-date,” says Suzuki.