Calving info at flick of a tail 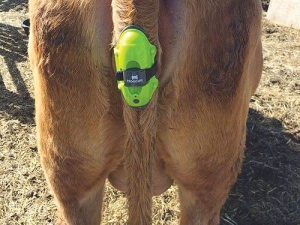 The Moocall device came about after farmer/inventor Niall Austin had a heifer in calving difficulties.

Calving cows means late nights and early mornings, with statistics showing around 18% of heifers need help and 7% of calves die at birth.

So a new device, launching at Fieldays, should be welcomed by farmers' looking for a few more hours sleep and, more importantly, peace of mind that all is well in the calving shed or paddock.

The Moocall device came about after farmer/inventor Niall Austin had a heifer in calving difficulties. This resulted in a dead calf and the heifer having to be put down after paralysis, all leading to a financial loss of around Euro 2000 (NZ$3300).

The device, which attaches to the cow's tail, contains a motion sensor that analyses the tail's movement. It refers around 600 pieces of data per second, comparing to an algorithm and predicting the onset of calving.

When this happens, an internal GSM device sends an SMS text to the farmer or stockman's mobile device, normally an hour before the event. Messages can be sent to two different phone numbers and the device's status, and that of others, can be viewed from a computer based 'dashboard' that records any activity including calving.

Power comes from an internal rechargeable battery with 30 days life. The unit is attached to the cow's tail, opposite the vulva, with an integral ratchet strap; it is shaped to resist removal by rubbing or knocking off and is water-resistant.

Launched in 2015 after four years of testing and development, units have been sold on 10,000 farms in 25 countries. It has 'overseen' 90,000 births and won awards for technical expertise, design and manufacture.

Depending on calving patterns, the manufacturer suggests that one unit can be used to monitor 30 cattle.

Especially it is useful for early or late-calvers, heifers, animals calving at night or pedigree animals that might need a vet's assistance. It should also prove useful to stockmen working away from the farm, or in situations where the farmhouse is a distance from the calving area.

The company is currently looking for distributors in NZ and Australia