Deals with trash in a flash 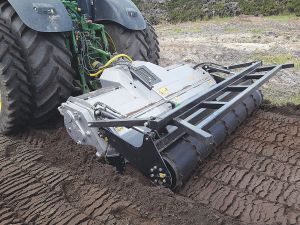 Active VMA is a Rotorua-based engineering business that specialises in roading, forestry, agricultural and construction equipment.

The company offers the FAE product range as a key part of their offerings. FAE group is an industrial equipment manufacturer based in northern Italy, who over the last 30 years have used their research and development department to become an industry leader in heavy-duty shredding and mulching machinery.

FAE heavy-duty trash cultivators have developed a following amongst contractors in New Zealand who specialise in converting recently cleared forestry and old scrub blocks back into productive land.
Until recently, timber remnants or slash from cleared forestry blocks, has been left to gradually break down. This has a potential to pose a serious environmental risk.

By using a FAE cultivator to clear the organic material that remains after harvesting, the remnants are shredded and fully incorporated into the cultivated soil. This helps organic material to break more rapidly, while also returning nutrients to the soil profile to give following crops a head start.

“Although taking the extra step to properly clear forestry land after harvest requires more time up front,” explains Ray Copland from Active VMA.  “It actually saves landowners time and money by ensuring a block is ready for a second forestry rotation or another crop much sooner.”

He says the practise helps eliminate the potential environmental risks caused by the huge volumes of debris left post-harvest.

The machines can shred timber up to 450mm -diameter, crush stones up to 350mm and offer a maximum working depth of 500mm – depending on model.

An efficient way to take out trash

The Kverneland CLC cultivator has been around for a number of seasons.