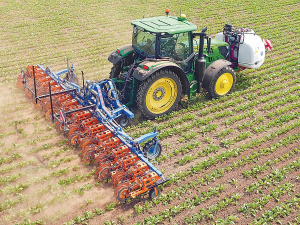 Amazone has reintroduced mechanical hoes to its cultivation line-up.

This follows the company’s acquisition of the Schmotzer Hacktechnik range – meaning it can now offer a comprehensive range of weed control options. Under this arrangement, Schmotzer will continue to manufacture, sell and service its implements under its own brand name.

The company believes the concept of ‘plant protection’ in the future is going to mean a lot more than the application of chemicals, which are under enormous pressure from resistance and regulation. It says plant protection will encompass how these chemicals are applied in combination with non-chemical control measures, such as cultivation, sowing, variety selection, crop rotation and management practices.

“It’s not inconceivable that farmers will reintroduce light cultivation to their cropping program to control volunteer grain crops and weeds in fallow or to incorporate heavy stubble,” says Amazone product manager Steve Gorman.

He reckons another approach is to increase row spacing to allow for mechanical weeding or hoeing, between rows in the crop.

“Hoeing can significantly reduce spraying costs, kill resistant weeds, improve aeration and water absorption, as well as breaking capillary water drawing in soil, while also offering the opportunity to band spray or side dress fertiliser at the same time.”

The Schmotzer portfolio includes a number of rear, front or mid-axle mounted configurations in working widths up to 9 m and row widths from 16 cm to 200 cm. Its heavy-duty designs incorporate a single-row hydraulic parallelogram unit; that accurately tracks ground contours such as steeply angled headlands or hilly terrain at speeds of up to 15 km/h – even in large working widths.

That’s a lot of drills

Amazone has recently reported the sale of its 250,000th seed drill, since the launch of its original two metre, D1 – back in 1947.

Since that time, the company has passed several significant milestones. This includes the launch of the power-harrow mounted D4 in 1966 and the arrival of one of the world’s best-selling drills, the D7 in 1972.  The 100,000th drill was manufactured in 1984; leading the way for innovative solutions like the tyre packer and wedge ring rollers, introduced in 1988 and 1998 respectively.

Amazone’s first pneumatic drill arrived on the scene 1995, which was followed by numerous models such as the Cirrus – a 3 to 6m unit that was launched in 2001.

Catros+ gets nutrients right down to plant root levels

New Zealand farmers can learn plenty about effluent management from their European counterparts.