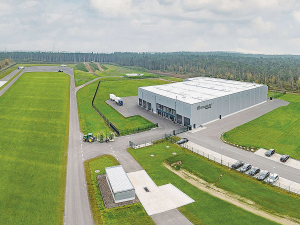 The Future Lab complex, built in just under a year at a cost of €20million, covers around 30ha and houses 30 staff.

It will be used as a validation comples to allow the company to test machinery, but also to prove supplier componentry before it is installed into Krone products.

There are also facilities to test components, sub-assemblies, electronic systems and software applications.

A further department is available to test transmissions - particularly conducting 'lifetime usage' evaluations. This is before these are incorporated into products such as the Big X foragers, Big Pack balers and the recently released Premos pellet harvester.

Making the most of the latest energy saving technologies, the building features solar panels for electricity generation.

The indoor facilities are complemented by a 1.1km test track that offers gradients up to 18% that will be used for driving tests, homologation procedures and software validation.

"The facility will provide us with excellent opportunities to explore the industry's rapidly emerging technologies, such as autonomous driving strategies," says Krone Group chair Bernard Krone.

Compatible with all types of headers, using the optional transport running gear for the XCollect maize header, all Big X models now stay within the bounds of maximum permissable axle load ratings, according to the company.