New pasture tool in the pipeline 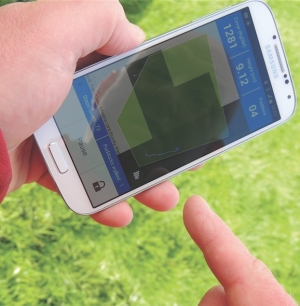 A NOVEL pasture meter jointly developed by English and Irish entrepreneurs was unveiled on the Enterprise Ireland stand at Fieldays.

The Grassometer uses four optical sensors to gauge pasture covers as the operator walks the farm. Its developers believe it is more accurate and convenient than the Platemeter or C-Dax now sold.

“The data is instantly transferred to your computer or smartphone as you walk the paddock and there’s no converting centimetres of pasture into kilogrammes of drymatter: it’s all done for you,” Sam Hoste, commercial manager of Monford Ag Systems, told Rural News.

Mounted either on the leg or a probe for wielding from a farm bike, the device takes multiple triangulated-readings of pasture cover each time the foot or probe hits the turf.

“There are four sensors and each one takes five measurements to give 20 readings used to give you one answer for that particular point,” explains Hoste.

Answers are instantaneous and electronically recorded to build a picture of the cover as the operator crosses the paddock, either walking or placing the probe from a farm bike.

“It can actually produce your pasture wedge for you on your smartphone as you go around the farm.”

The device is controlled from the user’s smartphone with data stored in the cloud enabling remote access by, say, farm shareholders or senior managers.

Triangulated readings compensate for slopes and GPS positioning in the phone means every reading point is recorded. An audible ‘squelch’ on each reading is designed to reassure the user the meter is working.

“If you do want to stop mid paddock and do something else you just hit pause.” But if the phone rings that doesn’t mean you have to stop doing the farm walk; calls can be answered without interrupting the meter-to-phone-to-cloud data transmission.

If worn on the leg, a two-second calibration on a hard level surface such as concrete or bare ground is required to check the height of the meter, but if permanently fixed on a pole that calibration isn’t necessary after the first use, says Hoste. “If it’s on a pole the height off the ground isn’t going to change.”

The Grassometer was launched in the UK and Ireland at the Grass & Muck event in May. Hoste says feedback from farmers was “positive with no negative comments”.

A first batch of Grassometers is being made and should be available in July or August. In the UK distribution is by farm supply cooperative Mole Valley Farmers. Price is €1600.

“You could order one on the internet for delivery to New Zealand but we are working on finding a distributor for it here,” says Hoste.