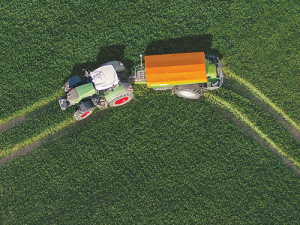 The new Amazone ZG-TS 1001 trailed spreader with 28 degrees of pivot angle is capable to true-track steering, even with a track width of 1.8m and a tyre width of 520mm.

With a 10,000L hopper, a working width up to 54m and an operating speed up to 30km/h, the new Amazone ZG-TS 10001 trailed spreader has the right specs for high-capacity, precision spreading.

The spreader is said to balance capacity, work rates and precision, and theoretically it is possible to spread 40kg/ha over 250ha in 90 minutes before reloading.

The top-of-the-line ProfisPro configuration has an on-board weighing system that automatically regulates the application rate using four weigh cells positioned between the hopper frame and chassis to constantly monitor the amount of fertiliser being discharged. It uses this data to adjust the metering shutter slides and the intelligent fill-level management system.

Vane kits can be quickly and simply changed, and the AutoTS system allows the spreader to switch seamlessly from normal to broad spreading without the need to change discs. The optional DynamicSpread part-width section control technology enables switching up to 128 part-width sections in wedge-shaped fields.

The steep hopper profile allows enough room for the same automatic steering system already found on Aamazone’s UX trailed sprayers. It has 28 degrees of pivot angle, meaning the 10001 is capable of true-track steering even with a track width of 1.8m and a tyre width of 520mm.

The spreader follows the same path as the tractor and the paths taken during previous or subsequent spraying operations, minimising crop damage and soil compaction. The steering system automatically switches off once the spreading disc drive is deactivated or ground speed exceeds 25km/h.

Steering, spreading discs and floor belt are powered and controlled via a standard tractor-based load-sensing hydraulic system or a new hybrid system. The latter requires only two-thirds of the oil capacity of the conventional load-sensing system, while the other third is generated via a PTO-driven hydraulic pump mounted on the spreader itself.

Ease of use is achieved by a double-acting spool valve allowing the hopper cover to be quickly rolled back or forth from the tractor cab; and integral leaf springs within the canvas ensure the cover stretches tightly over the hopper to make a weatherproof seal.

Safety is by means of a load-dependent electronic braking system permitting safe road transport at up to 60km/h, using the weighing system to constantly measure the amount of fertiliser inside the hopper and automatically adjusting the braking force.