Tea from an unlikely source 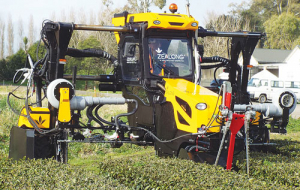 The ‘Transformer’ is a one-off machine built especially for Zealong’s tea growing operations.

Best known as the dairy capital of New Zealand, Waikato can also claim to be the nation’s home of tea.

The Zealong story starts in 1996, when Vincent Chen noticed the region’s abundant camellia bushes -- the same Camellia sinensis that is used to produce white, green, black and oolong teas.

In that year, Chen imported 1500 cuttings from Asia, and after a long quarantine he had 130 plants for his fledgling business. Fast forward 22 years and the Zealong Tea Estate now extends to 48ha, of which 25ha is used to produce 100% certified organic oolong teas that have won many awards around the globe.

Growing tea starts with taking cuttings from established plants. These need to be grown-on in specialised facilities for 18 months at a cost of $2.50 per plant.

Then they are returned to the estate and placed at 20,000 plants per hectare in a twin-row format. It then takes another four years before the tea is ready to have its first harvest.

Camellia sinensis has been known to thrive for 100 years in ideal growing conditions. It suits growing on most land types but the ideal is peat that is slightly acidic -- a pH of 4.5 to 5.5.

Rainfall at the Zealong farm is 1200 - 1800mm, but as farm manager Eric Lin points out, “wetter is better during the summer growing period”.

Tea growing centres on growing leaf, with no need for buds or fruit.

During the growing season the crop is fertilised with an organic mix of soya meal, sheep pellets and guar gum with trace elements of boron, calcium, manganese and zinc. Three applications are made in November-March at a rate of 7 tonnes/ha, delivering 275kgN/ha.

During the growing season a key task is the use of a specialised French-made tool carrier, bought two years ago for $350,000. This does a range of tasks such as fertilising, trimming, pruning, inter-row mowing and discing.

Trimming and pruning are done to create and maintain the plants in a box-hedge style 1m high x 1.2m wide. 1m is the ideal height (no bending) and 1.2m is the ideal width for hand picking from either side.

Dubbed ‘The Transformer’ the 100hp unit is a one-off built to Zealong’s specifications. It uses a hydrostatic driveline to maintain speeds from 0-25km/h; it covers 0.5ha/hour during trimming. The machine lives up to its nickname with a range of interchangeable task-specific attachments.

Harvesting begins in November with the ‘first pick’ taking the top three leaves of new growth off the plants. Two further picks occur at 8 to 10-week intervals, ending in March when the plants enter a dormant phase.

Harvest of the high-value, oolong crop is done by hand at the rate of 1ha/day; this work is done by 50 skilled workers brought from Taiwan under the recognised seasonal employer (RSE) scheme.  The three pickings gather about 4 tonnes/ha, with the resultant 100t of wet material turned into 2t of dry tea.

Camellia sinensis suffers no ill effects from Waikato damp and fog. But summer frosts can cause havoc with new growth. Managing this starts with sensors sending a message to the farm manager who may then call in helicopters to create airflow, as in orchards and vineyards.

So the next time you switch on the jug, ask yourself if that awkward spot in the back paddock might be the place to grow a crop of ‘Bruce Lee’.