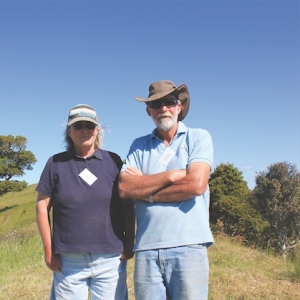 STEPHEN AND Jane Hayes run 348 sheep and 734 cattle on their 583ha property near Kaeo, just north of the Bay of Islands. For the past three years they’ve been Beef + Lamb New Zealand’s Far North monitor farm during which time they’ve lifted gross farm revenue $43,850, not to mention having better pasture covers and stock condition across the farm.

Stocking rate’s been lifted from 8.5SU/ha in 2011 to 9.7SU/ha. That’s despite initial concerns that stock weren’t getting enough to grow properly as it was in 2011.

“I didn’t feel we were doing a good enough job of feeding the animals we had without adding on more,” Jane commented to the field day.

But with the help of the monitor farm management team, the Hayes have lifted production by subdividing and increasing finishing stock numbers.

While the farm has 400ha in pasture but only a small portion on river flats and a plateau was suitable for subdivision. The couple trialed two forms, one developed by Kawakawa farmers Geff and Dinah Cookson and another by Arapohue farmer, John Blackwell.

The Cookson system creates 1ha sections with permanent wires, and if necessary, smaller areas with temporary fencing. Stock are moved every one to two days.

Under the Blackwell system small mobs are held on sections of less than 0.5ha. Stock are shifted by temporarily lowering fences.

Hayes says she enjoyed using the Cookson system over the Blackwell model as there was less daily work.

The subdivision has allowed them to carry more cattle than previously and they’re increasingly focusing on finishing rather than selling store.

In July 2011 they were carrying 44 10-month-old heifers but increased that to 39 spring born R2 and 80 spring born R1 heifers in July 2012. By July 2013 they had 183 heifers and with a range of ages they’re proving a useful pressure valve, keeping pasture quality high but with options to offload throughout the year.

Bulls too are being used as a flexible pasture management tool. The couple carried 65 autumn born bulls and 65 spring born bulls in July 2013 compared to a respective 24 and 40 in July 2011.

Spring bulls are marketed in November with the remainder being sold in mid-late autumn. Autumn born bulls will be marketed in late spring or summer depending on feed.

Hayes says there were some difficulties managing heifers through the drought. They had planned to market 60 autumn-born R2s at the end of autumn but needed to carry them through to spring due to insufficient weight gain. They’ll all be gone this month.

The farm carried 105 steers as of July 2013, 46 more than two seasons ago. They planned to offload them all by the end of last month to make room for bulls.

Heifers get the bulk of the new grass with the 150-head breeding herd tidying up behind. Hayes say they have done an excellent job, getting rid of pasture problems like carrot weed. However, they found the cows struggled to maintain condition through winter so last season the took the Monitor farm management team’s advice and delayed start of calving three weeks to better match seasonal grass growth.

While most calves won’t be ready for traditional weaner sales in March, Monitor Farm facilitator Gareth Baynham says it will mean the business earns more.

Thanks to subdivision and tighter grazing control the farm’s now producing much more pasture. At the field day they had 14ha shut-up for silage which was due to be cut by the start of this month.

The subdivision and stock increases have been gradual, which Baynham says has met the Hayes’ objective of funding development from profit, rather than capital borrowing.

The full benefits of the changes will be long-term, he adds.

“It would be interesting to come back to the farm in six years and see how things are going.”