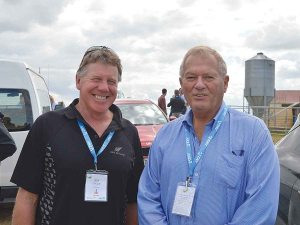 Pasture Summit chair Colin Armer and one of the host farmers Peter Sinclair at the field day.

The numbers speak for themselves on the Morlands Farm equity partnership: operating profit is $1000/ha above the Waikato average.

Operating expenses are $1.30/kgMS lower than an average Waikato farm. Equity growth from profit on Morlands Farm is forecast to top $2.5 million in 10 years compared to under $1m for the average farm in the region.

So what makes this equity partnership tick?

The equity partners, couples Pete Morgan and Ann Bouma and Peter and Jenny Sinclair, opened their farm in Pokuru to about 200 people for a Pasture Summit field day last month.

Morgan and Bouma and the Sinclairs are in their second season farming together in an equity partnership: they were neighbours 20 years ago and have remained close friends.

Now in their second year as equity partners, the couples have equal say in running the business Morlands Ltd, split into two farms, milking about 300 cows each in two milking sheds.

The Sinclairs own a 25% share of Morlands Ltd, which Pete and Ann already had set up.

Morgan acknowledges there are no templates or farm equity partnerships.

Both Morgan and Peter Sinclair run separate halves of the farm but share machinery and synergies. All decisions on farm are made by all four partners, who each have a key role running the farms.

Morgan is the business manager while Pete Sinclair looks after maintenance/operations. Ann, a qualified vet, looks after animal health and shares calf rearing duties with Jenny, who is also a DairyNZ farmer engagement group member on environment. Ann also looks after the accounts.

Morgan says their equity partnership runs a three-tier decision-making process: first, is there evidence a proposed solution will work; secondly, will it work on the farm; thirdly, will it be financially viable for the farm?

Morgan says the solution must take the business in the direction “we want to go”.

“We can pass the first two hurdles but drop it at the third because it still doesn’t keep us going forward,” he said. “We keep filtering decisions through these three layers. It helps our EP.”

Morgan also believes in keeping things simple on the farm.

“We make sure we don’t end up doing things we don’t need to do: we strip things right back to a basic level. I call it efficiency but others may call it being lazy.

“If I see something that needs doing I [ask myself] ‘can I actually do it with less energy, less money and less time?’

“When you complicate things they get more expensive and things break.”

Morgan says like any business, profitability is the key.

“We boil it down to everything you do: every paddock you put the cows into, every time you think about feeding something out.

“Every time you make a decision, think about what is the profitability impact that’s going to have.

“I believe if you need more than six numbers to work something out you are over-complicating things.”

While labour and stock costs were about the same, Morlands’ feed costs were under $1/kgMS, compared to $1.75 for Waikato.

Morgan says they don’t dwell too much on productivity, barely looking at production dockets from Fonterra.

“It’s not about production, not about gross income,” he said. “It’s about how lean we could keep the business and this dovetails well with our philosophy of keeping it simple and very objective.

The farm keeps a tab on feed costs, buying some hay and a few hundred kilos of PKE per cow.

“We realised early on that feed costs could blow things out. We never saw truly independent evidence of anything else.

“I’m not dissing the feed companies. Hardcore evidence in the industry over the last 40 years shows there are lots of hidden costs associated with feed.”