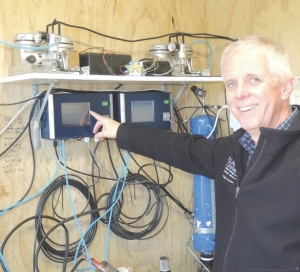 FOR MOST months of last year the Tomoporakau Stream leaving the Southland Demonstration Farm contained less nitrate than when it flowed onto the property.

While that finding from ground-breaking research by Lincoln University – with funding from Ravensdown – is good news for the farm and possibly the wider dairy industry, it is just a first year finding, stress the researchers involved.

“This is a really challenging but interesting project,” Lincoln University’s Prof Keith Cameron told a recent focus day held near the farm.

“The question we were asked to answer was what impact is the Southland Demonstration Farm having on the stream?” While it’s a simple question, answering it is far more complex, as Cameron relayed.

Detailed GPS mapping of the relatively flat farm found 138ha of the 295ha drains into the stream. How much water drains is calculated by deducting evapotranspiration from rainfall, and when it drains is worked out by monitoring groundwater levels across the farm.

When the water table is high, the farm contributes to stream flow; when it’s low the stream contributes to groundwater. During low-flow periods water entering the farm in the stream can take 50 to 100hours to reach the exit point; during high flows “it could be just an hour,” says Cameron.

A network of groundwater sensors has been set up across the farm to monitor groundwater level, and flow meters installed in box-section inlets and outlets where the stream enters and exits the farm, so the amount of water coming onto and off the farm via the stream can be measured.

The final part of the monitoring is continuously piping samples from those entry and exit points to two $25,000 sensors which log the nitrate content of the stream water using UV light in real-time.

What they’ve revealed is that the nitrate content is highly variable, from 0.1mg/L at one point in February last year, to a couple of spikes of nearly 13mg/L in early June.

During those spikes, nitrate content of the stream increased as it crossed the farm, but from July through to the latest data presented, nitrate content was nearly always lower in water leaving the farm (see graph).

Total nitrate loss from the farm down the stream equated to 43kgN/ha, which correlates well with the three-year mean calculated by Overseer of 48kgN/ha.

Cameron noted most of the nitrate leaching loss from the farm was in winter. “At that time of year the stream will be cold so the biological impact of leaching occurring here is probably less than if it was in summer.”

The fact the farm winters-on also means it is likely to experience higher nitrate losses than a farm that sends the herd away for wintering. Last winter about 11.5ha of winter crop was grazed in the stream catchment area.  This year it’s a similar area, though the farm has nearly 32ha of crop in total.

Farm manager Barry Bethune suggests a large effluent pond commissioned in the spring could mean a better result from this year’s monitoring, but Cameron counters that without eco-n “it’s possible we’ll see an increase in nitrogen lost.”

However, with only one year’s data so far, the headline message to date is to beware of spot readings of water nitrate content. “Simply taking low resolution nitrate spot readings and not measuring full water dynamics could lead to misleading conclusions about the environmental footprint of the farm,” he warned.

With $350,000 invested over three years already, another conclusion is that “this is a really expensive thing to do: it’s extremely difficult and time consuming,” he said to Rural News.