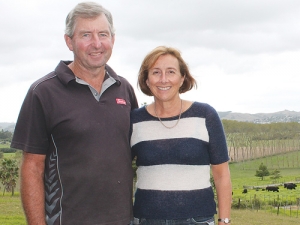 Richard and Dianne Kidd, of Whenuanui Farm, Helensville, began fencing and planting about 35 years ago for stock health and farm management. But enthusiasm also grew for the environmental side as they started to see the benefits.

The BFEA judges described the Kidd family's 376ha sheep, beef and forestry unit, as "a showpiece farm on the edge of Auckland city".

Richard Kidd says about 35 years ago they started planting poplars along fencelines and fencing drains.

"It meant the stock weren't getting stuck in the drains but it also meant by keeping stock out we were improving the quality of the water," he told Rural News.

"We pump from the streams for the stock so that immediately lifted the quality of the water we were using and of the water that would go down into the Kaipara Harbour.

"Bush blocks on the farm were in gullies: if you wanted to lamb a ewe or treat a sick one they would run down the hill and it was a hell of a struggle to get them out.

"So I thought 'if I fence off the bush they can't run in under it'. Before you knew it, all the regeneration took place and now they are vibrant blocks of bush with lots of seedlings.

"We've enhanced that and planted kauri and other native trees like rimu that weren't here. It looks good. We have always liked trees around the farm, aesthetically and for shelter and shade for the stock. Now every paddock has a trough; they don't have to go into streams. We've got good quality water for them. It started as good farming practice."

Richard and Dianne, who have three adult sons, have farmed the flat to easy-rolling property since the late 1970s. They are assisted by long-time manager Jeffrey Bradly, who oversees day-to-day stock management.

The beef breeding and sheep breeding and finishing operation runs 4820 stock units on 331ha (effective), with a pine woodlot established on 18.5ha and 15.3ha of regenerating native bush.

Diane says best farm practice is being able to manage your stock health, pasture and the shade for the animals. From that grew their love of the environment.

"Initially there were a lot of poplars and practical shelter belts and over time we've learnt a lot about the native trees.

"Because we've been doing it so long we are reaping the benefits of it so we enjoy the birdlife, the flora and fauna. Within two or three years as soon as you fence things you see the regeneration.

"The journey starts with best farm practice and you see all the benefits in the whole landscape of your farm."

Richard says when they planted they wondered if they would see them reach mature size in their lifetime. But they have some big kauris now.

"Once you get into it you see other pockets and you think 'I'm going to fence that one too because the others have come up so well'."

Dianne says you develop energy because you see the rewards early on. Now they thrill to see the native birds in their garden and all over the farm. Richard says that includes good flocks of wood pigeons. Council incentives over the years to retire parts of the farm for bush or wetlands have been helpful.

Dianne says they have done some fencing every year but it has to be balanced with resources, both labour and capital. It costs a lot.

"There is payback in spades in the environmental and stock health and running of the farm but you can't do it all in a year or two."

Richard says the shade and clean water definitely show in stock health. They have always had a policy of keeping nitrogen use to what is required. "We've never poured on massive amounts of fertiliser; always only what the land can sustain." They do plenty of soil testing and herbage analysis. They put on maintenance plus a bit more and make use of lime.

Diane says nutrient analysis available now is very sophisticated. "You can balance it from paddock to paddock, you know exactly what you're doing," she says.

Richard refers to computer programs that calculate the sustainable levels of nutrients. That's today's buzzword but he says they have always adhered to the principle without using the word. "We have done everything to make sure the land is looked after."

"We keep maintenance up and machinery is well looked after. It all makes for running an efficient operation but also necessary for the health and safety that's on everybody's mind these days."

In a safe environment fences and machinery are well maintained and if something needs repairing or a bridge has a broken board, they fix it. "We don't want accidents on the place," he says.

Richard and Dianne came in 1978 to the farm – then owned by an aunt and uncle – built up equity and took it over in 1992. That's when they sank money into capital infrastructure; fencing and planting had already started but they were able to invest more.

Dianne worked in Auckland in the early days and they have increased the size by 50% through acquisition of neighbouring blocks. They now have an economic size of about 376ha.

Richard says they have always been sheep and beef farmers. The main change is that the stock performance has lifted hugely. "In fact we are carrying fewer sheep and producing more lambs. The genetics have really improved."