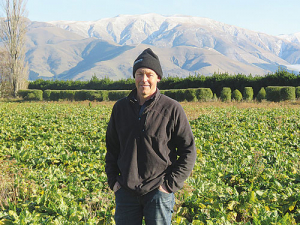 Earlys’ Mayfield farm is one of a small group in the Forages for Reduced Nitrate Leaching project looking for ways to cut nitrogen losses. They have so far achieved a 20% cut in one year on their dairy support farm.

The research results are made available to help farmers adopt new practices.

Cutting nitrogen losses is a key government goal in the quest to improve waterways; the government also support a nationwide uptake of farm environment plans (FEP). All the Earlys’ work on their land is guided by their A-graded FEP, in place for four years.

Primary sector groups met in June and called on all farmers to voluntarily adopt FEPs. Plans are currently required in Canterbury, Manawatu-Wanganui and on some farms in Waikato, Otago and Hawke’s Bay. Plans are independently audited.

Earlys run a 400ha dairy farm beside a 250ha dairy support farm used for grazing and animal feed cropping. for animal feed. The dairy farm milks 1400 cows at its peak.

The Earlys are part of two irrigation schemes -- Mayfield Hinds Valletta (MHV) and Barhill Chertsey Irrigation (BCI) -- whose members are helped to develop their FEPs. Earlys monitor their water use and use real-time soil moisture sensors to decide when to irrigate.

“It sets out a plan to manage and mitigate risks with a focus on improvements over time. The plan is a tool to prove to the irrigation scheme, authorities and the public that we’re achieving good management practice towards reducing nitrate leaching.”

Their FEP covers both properties and conforms to the rules of both irrigation schemes.

“The initial version of the plan is a snapshot of the farm, recording the physical set-up and management systems, mapping land management units (LMU) and identifying environmental risks,” Early explains.

“The FEP also requires that a nutrient budget be completed by an accredited entity.

“The irrigation scheme shareholders must complete and submit their plan annually. Once the first plan is prepared, updating later annual plans is relatively straightforward.”

The Earlys’ FEP identifies four LMUs on the dairy farm with different characteristics and risks. These areas have effluent irrigation, pivot irrigation, K-line irrigation and some are dryland blocks.

For example, on the irrigated winterfeed area, the potential for nitrogen leaching was identified.

“Our FEP states we will always establish a catch crop as soon as practical once a paddock has been eaten and not leave it fallow for a following winter feed crop,” Early says.

The irrigation scheme shareholders must complete and submit their FEP annually.

The Earlys use high-efficiency centre pivot irrigators on the two farms.

Irrigation scheduling needs to be carefully managed as nutrient leaching can occur if too much water is applied at the wrong time and drains to below the root zone. On their dairy support farm they also have installed soil moisture probes.

“The biggest advantage of soil moisture monitoring is the confidence to know when to start irrigating only when the crop or grass requires it,” Early says. “It makes sense for the environment and financially.”

Water flowmeters are installed on all irrigated farms in Canterbury. Data is transmitted to Environment Canterbury which checks that farms are not exceeding their water consents.