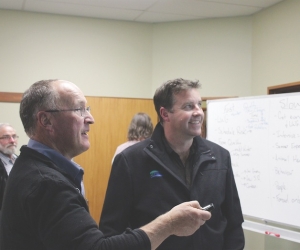 HAVING ALL animals on a farm growing at the same pace could result in big risks for drystock farmers, delegates at the final Finished in 20 Months beef seminar in Northland heard last month.

The three-year Beef + Lamb New Zealand project ran multiple studies to find techniques which would let farmers get beef cattle to finishing weights before their second winter, a key aim being to avoid having heavy animals on pugging prone clay soils when it gets wet.

But some in the trial have argued even 20 months is too long and target kill weights need to be hit at 15-16 months so they can be sold before Christmas and the subsequent slides in schedule prices.

Most of the on-farm work in the project looked at crops and prioritising use of them by feed quality and stock class. Farmers using these ‘fast track’ systems have generally carried fewer animals/hectare to achieve faster liveweight gain with animals putting on 1kg/day or more.

Besides the concerns about not achieving kill weights before autumn’s lower schedules, researchers also acknowledged the need to control pasture quality in spring and autumn, particularly with kikuyu which can quickly become unpalatable if it gets away.

AgFirst consultant Gareth Baynham analysed the impact using Farmax modelling. In one scenario, 63 bulls bought at 250kg and run on 30ha (ie 2.1 bulls/ha) were finished at an average of 313kg carcass weight between January and March.

That compares with a slow track system with 100 bulls bought at the same 250kg weight and run at 3.3 bulls/ha to be sold from November through to April after their second winter.

Baynham says that in a year with average weather there is almost no difference in returns: $929/ha from the 63 bulls and $905/ha from the 100 bulls. In years where the farm had a cold wet winter the fast-tracked system did slightly better, making $725/ha versus $605/ha in the slow track system, but in a good year the fast-track system made $834/ha compared to $1354/ha from the slow-track.
The reason was the stocking rate in the fast track system meant only 61% of pasture grown was used to produce 381kg cwt/ha while animals at the heavier stocking rate used 78% of the pasture, producing 533kg cwt/ha.
The take home message is that tools are needed to manage feed quantity and quality regardless of whether more or fewer animals are carried, says Baynham. Higher stocking rates carried longer can mean better use of flushes in growth but equally stock can go backwards faster during feed pinches if not managed. Using nitrogen, slower grazing rotations and subdivision can help increase pasture availability, and broadcasting annual ryegrass is an option to improve pasture quality.
When running fewer animals other classes of stock might be needed to manage pastures or speed up the round if grass is getting overly long. If there’s a deficit, PKE or nitrogen might still be needed.

Baynham warned there was no one solution. Finding a mix of tools to suit the farm and system is the key.

“Don’t rely on recipes: think about what would work on your own farm.”
For example, Hokianga drystock farmer Laurie Copland, one of the participants in the trial, runs breeding cows and bulls on his 450ha farm at Broadwood, 65km north-west of Kaikohe. The farm has flats at the front and broken hills to the rear. Copland runs the bulls on the productive flats and moderate hills, using breeding cows to control the steeper country and deal with any surplus left by the bulls in times of peak pasture growth. He also maintains an extensive regrassing programme on the flats which helps keep pasture ME at 9.5MJ/kgDM or above throughout year, even though elsewhere summer kikuyu pastures can drop below 7MJME/kgDM. The result is summer liveweight gains of 0.9kg/day without use of supplements, rising to 1.38kg/day in spring.
Reseearch data on growth rates off ryegrass was also presented at the seminar, showing that finishing cattle on 10-11MJME pasture will gain 1.25kg/day-2kg/day, given enough of it, but if quality is allowed to slip to 8MJME they’ll actually lose weight given the same amount of feed.