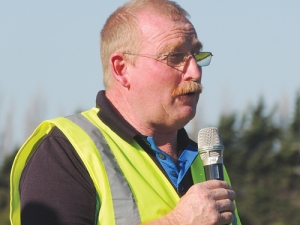 A 42-day round and fine weather’s built LUDF average cover to just over 2600kgDM/ha, according to farm manager Peter Hancox.

In February the management team at Lincoln University were wringing their hands as the season appeared to be turning to custard, but at the latest field day the tone was much more upbeat.

Nips and tucks rather than drastic cuts is how Lincoln University’s Dairy Farm (LUDF) is meeting the challenge of low payouts.

The high profile unit held one of its quarterly focus days earlier this month and revealed it’s on course to beat budget cash farm working expenses this season by nearly 3%. That’s despite a dry season dictating more irrigation than usual and 15% of pasture being renewed.

Milk output is back 3.3% but from 11% fewer cows with 43% less nitrogen fertiliser and 48% less imported silage.

“These are an impressive set of metrics and I have to say we’re a little bit proud of them,” Ron Pellow of the South Island Dairy Development Centre told the focus day.

“We have shown [reduced stocking rate and inputs] can be a profitable outcome, the profit, of course, being relative to what the payout is doing.”

Pellow says he’s eager to see how, come July, LUDF’s final profit will compare against the half dozen top performing Canterbury dairy farms which it has benchmarked itself against in previous years.

“When we set the budget, nitrogen was about $700/t and it’s come down to the high $500s, and we’ve used slightly less,” said Hancox, reflecting on the 143kgN/ha applied.

Regrassing costs have also come in well under budget at $24,000 instead of the planned $37,000 thanks to direct drilling one of three paddocks, and a dry spring reducing damage so less over-sowing was needed.

Not employing any casual staff and delaying replacing a staff member who left late March leaves $9647 extra in the bank on budgeted employment costs of $260,000, and vehicle expenses are down nearly $11,000 from a planned $31,336 thanks to cheaper fuel, less mowing, and repairs and maintenance savings.

Increased irrigation owing to the dry season put all irrigation costs, electricity included, 25% over budget at $76,878 to the end of March, and with unseasonably warm, dry nor-west weather earlier this month it was possible the pumps could be back on again, the field day attendees heard.

But the biggest budget blow-out is replacement grazing and meal costs – mainly more milk powder and calf meal, taking $19,791 more than planned off the bottom line.

Animal health and breeding costs are also up on budget.

Asked whether the budget for next year would be much different, Hancox said it wouldn’t be.