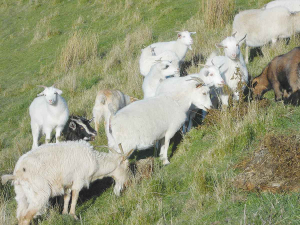 A report on the NZ goat industry aimed at charting the future for domestic and export goat products has dismayed long-time industry expert Garrick Batten.

In the second of two articles, he outlines the issues he has with the report. Read the first article here.

The Massey University 2017 Goat Industry Report to Federated Farmers, funded by AgMardt, was to ‘determine current value of domestic and exported NZ goat products and explore possible future products and their target markets’.

However, its grab-bag of aged references from limited and incomplete sources and unsubstantiated opinions was mixed into computer models. That has produced misinformation for false conclusions with scattered relevance.

This article attempts to translate the report for an industry with a bright and promising future when based on reality.

Meat is the end product of all farmed goats on any livestock farm. Current goat schedule prices without grading issues are more profitable than beef and mutton.

Unfortunately, this report’s section is the most misleading. Goats’ multi-benefits get only one small paragraph. However, goats importantly groom pasture like cattle, enhance clover content to improve pasture feed quality, and eat pasture and scrub weeds; the report did not mention their major thistle target. Pugging is not an issue and they do not need fencing from waterways like cattle.

However, the Boer Goat Breeders Association members of now-defunct Meat Goat NZ Inc drove the report to promote their breed. It was based on about 2400 Boer does farmed by now 23 members producing an estimated 4% of the annual kill.

It assessed current and potential production of all Boer multiple kids of 30kg average liveweight at six months, and 49-62kg at eight months to produce an average multi-sex carcase of 25kg from impossible growth rates under commercial pastoral conditions. Forecasting a future only from Boer goats prioritises them over all other goats producing meat – although the export market does not. There are clear and profitable market opportunities for typical carcases from low-cost feral-based stock in existing pastoral conditions.  Both local and export markets seek our carcases without differentiating breed, age, sex, condition or weight above 8kg.

Current schedule increases do not need Boer genetics or the inflated, confusing and conflicting production figures in this report.

Cashmere has seven comments in the report – yet it quotes a 2011 reference that it is too labourious to harvest.

In fact, over 200 000 goats were shorn in 1990 for 34 tonnes at $33.20 per kg. So it damned the current opportunity, driven by NZ Cashmere with an established chain from farm-to-garment, urgently needing more fibre to replace Chinese imports (www.nzcashmere.com).

The report also confuses mohair text, tables and conclusions. There are either 9370 or 10081 goats with unrealistic average all-ages carcase weight of 25kg. These are producing either 3 or 4 kg mohair each, for confused local and export use by either 200, 110 or 100 Angora goat farmers.

It identifies an issue of not enough industry information – despite historical breed society records and only two fibre outlets.  A lack of new farmers’ understanding was also noted – despite 30 years of providing it. Unknown farmers’ concern about goat control is no longer a problem with farmed goats and electric fencing. The report’s only answer was future speculation for this declining sector. None of these are reasons for not using existing knowledge for the opportunity now to farm 35 kg Angora goats each clipping $50-plus – compared with sheep and wool.

The report’s section about a major NZ farming success is the most confusing. The only identified future issue is lack of information, despite also noting high somatic cell counts. Ignored are high housing, machinery and operating costs for the cut-and-carry system for quoted farm-gate $17 per kg MS from 800 litre does over average 220 days lactations. However, the sector has a sound and profitable future based on Asian markets for powder, infant formula and UHT milk currently produced by the large and successful co-op and five other significant processors – all supplied by large herds.

The report attempts to promote a future for cheese production based on current estimated 10 small and artisan herds, using questionable figures and an irrational assumption. It does not mention onerous regulatory costs, high set-up capital costs for production and processing, or competition from subsidised imports. Or the scale necessary to commercially produce economical cheeses.

Garrick Batten has a long professional and practical career in all goat sectors. He has written extensively, including several goat books. The latest is Big Buck$ for Pastoral Farmers, written specially for livestock farmers new to commercial goat farming. https://www.copypress.co.nz/real-nz-books/

A 2017 commissioned Massey University report on the NZ Goat Industry will disappoint many.