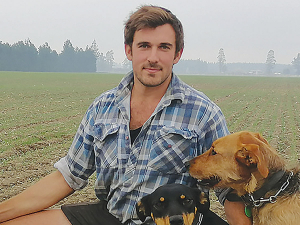 Taggart’s 732ha farm at Cust has grown over the decades as his grandfather and father expanded the original block. The family’s biggest decision was whether to convert to dairy or stick with cropping when the Waimakariri Irrigation (WIL) scheme was introduced in the late 1990s.

“Almost everyone around here converted to dairy. But we decided to continue as an arable farm with some sheep and beef finishing and to intensify our operation which made sense as we had more water available,” he explains.

“Our plan changed from constant expansion to intensification which has opened up different doors.”

Over the last few years, Taggart (28) has refined the farming operation to a niche range of crops and contracts.

“In the beginning, we said ‘yes’ to every contract and grew a wide range of crops. We still have wheat and barley as our core crops along with perennial ryegrass seed and a couple of clover paddocks,” he says.

“It’s important to focus on your core goals, rather than spreading yourself too thin.”

Taggart is a keen advocate for precision agriculture and says this type of technology has lifted the bar in efficiency and environmental benefits.

“Back in the day you had a basic tractor and had to rely on operator skill. Our new tractor has GPS and autosteer which takes luck out of the equation,” he explains.

“We’ve also signed up for a new fertiliser spreader which has cameras to view the fertiliser being spread and adjusts automatically for wind.

“It’s important to be as precise as possible and we want to be at the front of the pack in technology. It’s better for the environment and saves us money when we use less fertiliser.”

“Technology helps to improve the environment while also reducing costs. We’re seeing investment in technology right across North Canterbury and this will go a long way towards reducing the level of nitrates in our waterways.”

Proposed reductions for nitrate levels are concerning for Taggart because, while he believes everyone needs to take action, he is concerned about economic impacts.

“We’re a larger operation so we can afford to invest in technology, but some farmers may not be able to, so I think we need a balanced approach. We all know that we need to make reductions, but how we go about it is the key.”

Collaboration is important to Taggart and he enjoys bringing people to discuss issues and opportunities. He is the arable chair of the North Canterbury branch of Federated Farmers and a member of the Next Generation Farmer group (NGF).

“We only have a few arable farmers in North Canterbury and working together is the key to a sustainable future,” he says. “NGF doesn’t just represent the next generation of farmers, but all farmers. The aim is to be a port of call for the zone committee and Environment Canterbury. We want to be part of the process.”

Taggart is already thinking of new ways to diversify and add value to his farming operation.

“We could plant around the irrigation ponds and add some baches with views to the Cust River. I think more tourists are looking for that kind of local experience where you get to interact closely with nature.”

While diversification is important, the ultimate long-term goal for Taggart is to leave the land in excellent condition for future generations.

“We want to leave the land in better condition than we found it.”