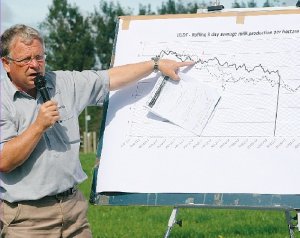 "We challenged ourselves to increase efficiency without increasing our environmental footprint: in essence, to increase the profit we make from the resources we have available."

Where historically the milk curve has dropped 9-11% per month by the end of February, this year it's averaged just 4.4%.

So how's it been done?

Cutting the herd boosted average BW from 94 to 109, and the two mobs have helped fine-tune pasture management and pay extra attention to the cows that need it – heifers and lights.

"If the smaller herd hasn't grazed down to residual we put the big herd in there next to get to residual," says farm manager Peter Hancox.

"If they don't get there, then we'll put the mower in next time round."

That mowing policy is also new – previously mowing was for silage only or exceptional circumstances. This year it's used judiciously, usually pre-grazing, on the occasional paddock where for whatever reason forcing cows to eat to target residual has been deemed to have too high a cost in lost production.

"In past seasons we've been hell bent on (making cows eat to) residuals. This season we've got slightly more of a cow focus, to try to increase their intake," adds Hancox.

Besides dealing to residuals, pre-graze mowing is used to lift pasture drymatter content when it's particularly low.

Combined, the two cases for cutting have lead to about 100 hours mowing to date: typically one in five, to one in seven paddocks per round.

"So we've gone from very low (diesel use) to not very much," notes farm management consultant George Reveley.

Cut height, and more importantly, target residual, have also been lifted this season, but again it's a case of from very low to not very much: 7-8 clicks on the platemeter to 8-9 clicks.

"We still want to graze paddocks down so they're very tidy, grazing the clumps out to 70-80%," stresses Reveley.

Another change is to shift cows promptly if paddocks get wet and dirty.

"We'll clean it up another time. Previously we've tried to get that done pretty well right away."

The other key change is more nitrogen. Last season compensation for clover root weevil's decimation of clover – down to 1-2% in most paddocks – saw use rise to 260kg/ha. This season's tracking even higher.

"We grow about 640t extra dry matter a year compared to the average on this farm."

The net result, with the herd eating more, higher quality grass, is 1254kg MS/ha in the vat as of February 8, on a par with some of the top-performing herds in the region, and spending on track for the season target of $3.85 only a whisker ahead of budget at $2.91/kgMS.

"We're very close to the grain feeders... we realise we've still got places to go – our reproductive performance isn't as good as them – but we've a lot of pride in where we've got to, to date."

A focus on maximising carcase value

A Lincoln University student, Lucy Hewitt (20), has a keen interest in maximising the value from every animal carcase.