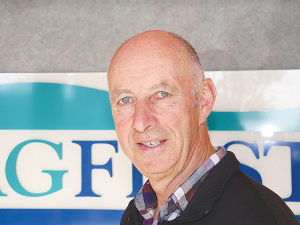 Phil Tither believes the value of monitoring and collecting hard data cannot be underestimated when dealing with adverse events such as a drought.

Phil Titther has been working with a farmer in a summer dry area, west of Hastings.

The farmer runs Friesian bulls and finishes lambs on his 430 hectare property. He is an ardent user of Farmax, recording his monthly pasture growth rates. Normally he would grow around seven tonnes of dry matter annually, but last year - because of the drought - it was down to five tonnes.

"So that was when the production crashed. But what was interesting was that his gross income per ha was the highest it's been in 13 years," Tither told Rural News.

"He did this by adapting his system to be a total finishing enterprise - even though some people would look at the land and say it's not easy finishing country. But he has worked hard on improving the quality of feed on it and it's just interesting to watch the way that some of those trading enterprises can buffer that poor physical result with a very acceptable financial result."

Tither adds that it's not just about having a flexible livestock policy, it's about driving this and collecting data - such as monthly pasture assessments. He says having the data to know how many lambs and bulls they can fit in their farming system and whether they've got the pasture cover to fit them in, they won't be buying more and likely selling some stock.

"So, they keep making their system fit their feed supply," he explains. "The people who make lots of incremental decisions and monitor it tend to come down in stocking rate earlier, but they are also in a position to come up earlier.

"That's actually better because when I look at the margins that hold up revenue on these flexible enterprises, it's because their entry point back in is still quite cost effective."

Lochie MacGillivray notices that good farmers make regular incremental calls about reducing stock numbers, rather than making big calls and says getting rid of large numbers of stock at one time.

"The incremental step down approach is by far the best," he told Rural News. "I have seen farmers panic and sell all their stock and suddenly it rains and they are left facing a costly catch-up process."

Another of their clients is disciplined in their pasture monitoring and this has paid dividends. In this regard, the farmer recorded pasture growth rates back in January dropping by about 4% compared to their long term average increasing to being 40% down in April. The farmer had a plan to deal with this and as the pasture growth rates slowed, they changed their plan to deal with the situation as it unfolded.

It was agsin the case of incremental changes, rather than lurching to major changes.

According to MacGillivray, it's about actively managing the plan all the way through.

"It's not just about having plan A and B and if plan A fails you move to plan B and maybe in the back of your mind there is plan C," he adds.

"This is about continually monitoring and changing to fit the circumstances as they evolve. People kind of think this is my feed budget for the winter and its static. That's not good enough - it has to be dynamic."

Phil Tither says many progressive sheep and beef farmers monitor kilograms of meat per hectare as a better indicator of the progress they are making, as opposed to more traditional measures of stock units and per head performance.

He says the key to all of this is knowing the state of pasture by careful monitoring and also knowing what reserves are available.

Tither explains that farmers they notice that cope reasonably well in a drought are those that have good data. Some, he says, have been using Farmax for up to 16 years and develop good models to test possible scenarios.

"A lot of people say don't complicate things with software and claim they do it on the back of a cigarette packet. Possibly but not likely - technology is there to help us and why not use it."

Lochie MacGillivray says there are real gains in taking a data-driven approach, particularly when climate and or markets are changing. In terms of optimising land use, he says there is a tendency to deal in averages.

However, he says if farmer have it written down, those numbers are tangible.

"Without a plan there is a void and that void is filled with anxiety and you worry your way through that."

Tither believes the value of monitoring and collecting hard data cannot be underestimated when dealing with adverse events such as drought.