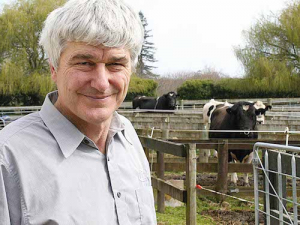 CRV Ambreed says its genetic research into reducing nitrogen leaching on New Zealand dairy farms has identified that a proportion of the nitrogen is diverted away from the cow’s urea, going into milk protein.

The company says this finding gives it further confidence that breeding cows for low milk urea concentration will not only reduce the amount of nitrogen excreted in their urine, but will also increase the efficiency with which dietary nitrogen is used for milk protein production.

The search to understand precisely how animals partition the nitrogen they consume has been researched for decades, to discover how to make cows more efficient in the way they use dietary protein. The relationship between milk urea and the percentage of protein in milk identified by CRV Ambreed should give scientists new leads for that work, the company says.

It has begun marketing semen from 20 existing, high-performing bulls under its LowN Sires brand. The bulls are desirable for traditional traits and are genetically superior in their ability to reduce concentration of milk urea nitrogen (MUN) in their daughters.

CRV Ambreed says its research has shown it is possible to breed cows that genetically have lower MUN. These cows are then expected to excrete less nitrogen as urine and consequently less nitrogen will be leached into groundwater. Calculations by the company show a reduction of 20% in leaching within 20 years is possible by using genetics to breed cows with lower levels of MUN.

Now, further analysis indicates where at least some of the nitrogen goes if not into urea. This finding is thought to be a world-first in demonstrating variation between cows of differing genotypes for how they partition dietary nitrogen eaten in the form of protein.

“From an environmental perspective, we saw urine as being the big issue because of its impact on water quality,” Beatson says. “And we asked, can we breed cows that have reduced MUN? And if so do these cows excrete less nitrogen as urine?

This means not only can LowN Sires and a low-MUN approach be used to breed for environmental gains, but also possibly for an increase in animal efficiency.

Beatson says modelling and genetic analysis of the LowN Sires bulls suggests about 25% of the nitrogen that will be diverted away from urine in their daughters will go into milk protein. Higher percentages of milk protein is good news for milk processing companies wanting less water in the drying process.

He understands the low-MUN and high percentage protein genetic link is a world-first and so could be a clue to understanding how animals partition the nitrogen they are fed.

“Animal nutritionists will be extremely interested in our finding as there have been decades of research into nitrogen-use efficiency.”

Beatson says this discovery could be the tip of a research iceberg.

“A huge effort has been made over the last 70 years trying to understand nitrogen partitioning and that’s produced some interesting trends but nothing conclusive. Now NZ scientists may target groups of animals known to be diverse for MUN to investigate differences in how they partition dietary nitrogen.”

He says while breeding versus feeding cows are different avenues in reducing nitrogen excreted as urine, the two are expected to be additive. “In other words, genetic gains will add to gains from better feeding.”

It may also have implications for other than dairy cows. “This research gives us confidence that cows bred for reduced-MUN will partition nitrogen differently and this is likely to be true for all ruminants.”

Phase 2 of the research will study groups of animals genetically different for MUN to understand more precisely the relationship between reducing MUN and reducing nitrogen in urine.

The primary cause of nitrogen leached into the ground and waterways is cows' urine having very high concentration of N and being deposited in small patches. Some of the nitrogen excreted is converted to gas, some is taken up by plants and a substantial amount is leached, with soil-type affecting the proportion that is leached.

CRV Ambreed, with the input of other researchers, has spent five years investigating the genetics of milk urea nitrogen (MUN). The rationale has been that if it’s possible to reduce MUN through traditional genetic selection means, and providing the relationship between MUN and amount of nitrogen excreted in urine holds, then the genetically improved animals for MUN will excrete less urinary nitrogen and hence leaching per animal and per hectare can be reduced.

“Cows bred for lower levels of MUN are expected to excrete less nitrogen in their urine which will, in turn, reduce the amount of nitrogen leached when cows are grazed on pasture,” CRV Ambreed researcher Phil Beatson says.

“It could save NZ 10 million kg in nitrogen leaching per year within 10 years, based on the national herd number of 6.5 million dairy cattle. Farmers who start a breeding programme for low-MUN now add another tool to their farming systems to manage nitrate leaching and are looking at potential nitrogen leaching reductions of 10-12% by 2025.”

That’s significant, Beatson says, and it comes with minimal or no disruption to normal farm management.