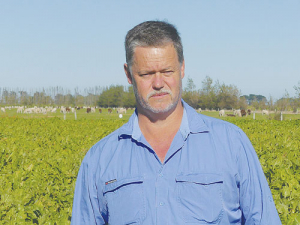 A pioneering researcher into feeding fodder beet to dairy and beef cattle in New Zealand, Gibbs was responding to comments from DairyNZ senior scientist Dawn Dalley that some veterinarians were “really struggling” with emerging health effects of long-term fodder beet use on dairy farms.

She will be a lead researcher in a large study of fodder beet use, led by the South Island Dairy Development Centre with Dairy NZ and others, funded by a $500,000 grant from the Sustainable Farming Fund.

“The farms that seem to be getting these issues, particularly on phosphorus, are the ones that have been in the fodder beet feeding game for up to 10 years now,” said Dalley.

However, Gibbs said phosphorus deficiency in fodder beet-fed animals is “not widespread by any means”.

“I’m the scientist who developed dairy fodder beet feeding systems and as an extension of that the beef one,” he said.

“You only have phosphorus issues in a few relatively restricted dairy environments in NZ and it’s spectacularly easy to deal with.”

Gibbs questioned the validity of long-term problems when early adopters of fodder beet had now been using it successfully for many years.

“I want to know how long do we wait. These cows are dying of old age.”

On farms needing phosphorus supplement, the key was feeding DCP in an effective manner, such as by soaking it through straw and feeding that to the whole herd every day during the time they are on beet.

However, some farmers were told they only needed it for limited periods or were “sold a pup” in the form of buckets or licks.

“As we pointed out from day one, there’s 50 years of research showing even acutely phosphorus-deficient cows don’t go and eat phosphorus on demand.”

The best herd acceptance of free-choice supplements for minerals is about 80%, he said.

“20% of them will never go near it. You can imagine that 20% of a dairy herd that are critically needing phosphorus is a lot of cows to be on the ground.”

To use DCP effectively it has to be put out at 50g/cow/day in a system that works, he said.

“It can be problematic in the sense that it’s a little bit of work for the farm to get that system right.

“So a good farmer gets that right and there’s no problem. It’s worked very well for us for 13 years, including these places that really needed it.

“But you can take all manner of shortcuts and get all manner of poor advice given to you, and in those cases DCP is worse than useless.”

Responding to Gibbs, Dalley acknowledged that it was his research that led to the recommendation to use DCP with fodder beet, “but what we’re hearing from vets is that it’s not solving the problems in a lot of herds”.

It could be difficult to get it uniformly administered, she said.

“The things we’re looking at are the interaction between calcium, phosphorus and vitamin D, and further understanding the range of mineral content in fodder beet.

“That is data that Jim may have but we haven’t been able to access that.”

She added that fodder beet is now being more aggressively fed through the lactation period rather than just as a winter feed.