Passion and innovation pay off 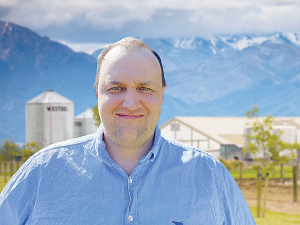 Rhys Roberts chief executive of Align Farms, which runs seven farms between the Ashburton and Rangitata Rivers in Mid- Canterbury, this year’s NZ winner of the Zanda McDonald Award.

A Mid-Canterbury dairy farmer passionate about innovation and continued improvement has been named this year’s winner of the New Zealand Zanda McDonald Award.

Chosen by the judges for what they called his entrepreneurial and innovative approach, Rhys Roberts is the chief executive of Align Farms, which runs seven farms – six dairy and one dairy support – all between the Ashburton and Rangitata Rivers in Mid-Canterbury.

It also runs a market garden and a “vertically integrated” yoghurt business with its own brand sold throughout the country.

Zanda McDonald Award Patron Shane McManaway said Roberts was highly ambitious and prepared to break the mould of the past and do things differently.

“Some of the results he’s seeing, due to his innovative approach, are nothing short of exceptional. He has a strong environmental and wellbeing focus, as well as creating a significant difference to the company’s bottom line.”

A major example of Roberts’ approach is that he is currently running a trial of regenerative practises on one of the Align farms, with 148ha being farmed regeneratively and 140ha farmed conventionally.

“There’s two vats, two herds, two everything, and we compare the data so that we can get true and accurate data on the effects of low-impact farming – from milk production, grass growth through to profitability.

Roberts says they did not want to just say that regenerative agriculture was great because emotionally it sounded great – they wanted the data.

“What we’re seeing is that productivity has dropped back and profitability at this stage looks like it’s going to be $800 a hectare lower on the regen side than from the conventional side.”

However, it was early days, he said.

“I’ve got 20 years of conventional experience and 20 minutes of regenerative, so we’re taking the time until we build up how we farm in that environment.

“To be fair, we probably put it down as a success to date, even though there is a drop of profitability which obviously we are not happy about.

“It’s better than expectation, although our expectation wasn’t very high when we started.”

Roberts says there are some important lessons coming out of the regenerative trial, such as dropping stock rates while improving per cow performance.

“We’re seeing some really great stuff from the pasture production point of view around introducing diverse species. We believe that that’s going to be a really big success of the trial and also believe that slower or long round lengths is another really key learning that we’re taking out of it.”

Roberts has been with the Align about 10 years, five as CEO, and leads a business with peak staffing of about 30.

The yoghurt business produces the Cyclops brand, which came out top in two separate comparison tests by Stuff in 2015 and 2017.

Roberts says the yoghurt takes only a small portion of the group’s milk but that is growing “on a daily basis” as demand grows. Most of the milk goes to mainstream processors, the various farms supplying Fonterra, Westland and Synlait.

Align also runs its own market garden on one of the farms. Roberts says that was established because of a vision within the business to supply its teams with 60% of their diet on-farm, and not just milk and meat.

Roberts says the well-being of the staff is important and he is passionate about “future work places.”

That meant asking what the workplace was going to look like in 2030 and trying to achieve that by 2025, then looking ahead to 2040 and repeating the process.

Roberts says plenty of challenges are facing New Zealand agri sector and emissions is “an area that we’re staying close to at the moment.”

“The other one is just improving our genetics by breeding the ‘perfect cow’ but also looking at introducing some low methane and low-N genetics into our herd as well.”

The Zanda McDonald Award is named in honour of Zanda McDonald, a leader of the Queensland beef industry who was prominent both in encouraging young people and in promoting trans-Tasman networking in the primary industries. He died in an accident at the age of 41 in 2013. The award was established the following year to recognise and support young people in primary industry on either side of the Tasman. For the past two years separate Australian and New Zealand winners have been chosen because of Covid border closures.

The recent rise of the Omicron variant also scuppered plans for this year’s four New Zealand finalists to meet the judges in a three-day event with presentations, media training, guest speakers and farm visits, and it instead went online.

Roberts’ prize package will include personallytailored mentoring trips and training in his chosen topic, which he says is more than likely to be around vertical integration and associated business models.

A Mid-Canterbury dairy farmer passionate about innovation and continued improvement has been named this year's winner of the New Zealand Zanda McDonald Award.

An entrepreneurial approach to primary production has resulted in Rhys Roberts of mid-Canterbury receiving the 2022 New Zealand Zanda McDonald Award.

The Australian Agricultural Company (AACo) have signed on to partner with the prestigious Zanda McDonald Award.

Eight finalists have been for the 2022 Zanda McDonald Award. Two winners - one from each side of the Tasman – will be crowned in November.

Sam Vivian-Greer, a farm consultant at BakerAg in Wairarapa, has been named the winner of the 2021 New Zealand Zanda McDonald Award.