Pressure to cut N use 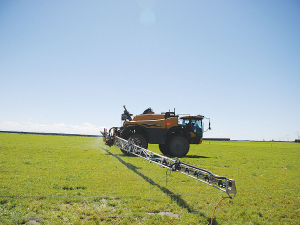 Farmers are wanting to change their fertiliser programmes to lower both their N footprint and costs.

That’s the view of Donaghys managing director Jeremy Silva, who says his company is working at capacity to keep up with renewed demand for its N-Boost nitrogen booster product.

“It’s one of the few options out there that can help farmers maintain or lift production off lower nitrogen inputs,” he says.

“We’ve seen the dual impact of high urea pricing and regulations on N come together.

“The result has been a wave of dairy farmers turning to foliar applications of urea.”

Silva says that farmers using N-Boost can cut back their application rates to get under the N-cap.

“And they’re finding they can cut their urea bill and protect their dry matter production.”

N-Boost is a patented formulation that contains adenine compounds and amino acids. It is sprayed onto pasture by conventional boom sprayer after mixing it with dissolved urea in a mixing station, which Donaghys supply to farmers.

The company says it has seen a lift of more than 85% in N-Boost sales this season.

“We’ve ramped up our production of N-Boost to keep up with this growth,” Silva says. “Additional mixing stations are on order to supply to farms coming onto the N-Boost system.”

He says, at its peak around 7% of dairy farmers were regular users of the N-Boost system. However, that number tapered when the urea price crashed to around $500 per tonne.

But Silva adds now with the lift in urea prices, demand is rapidly heading back towards previous levels.

While supply chain disruptions have seen fertiliser prices across the board lift, N-Boost is not impacted to the same extent.

“The majority of raw materials are made in New Zealand, so there’s limited risk of it running out, or not being available when a farmer needs it.”

Donaghys have an online nitrogen use calculator for dairy farmers to see how the N-Boost system could work on their farms.

The calculator shows the N-Boost system cuts urea costs while maintaining production, providing a total financial benefit of $130,000 p.a. on the average farm size of 233ha applying 129kg of nitrogen to their pasture.

“Farmers will be working with their accountants, their bank and advisors to mitigate the impact of these large urea price rises so they can close out the year and achieve budgets,” Silva says.

“Cost-control and production are top of mind for dairy farmers. They will look to options that don’t sacrifice production. The N-Boost system is a proven tool to help you reduce your N applications to cut costs without costing dry matter production.”

The online calculator is located at: www.n-boost.com

More tools in the box

There's been noise in the market recently about urea coatings that can reduce volatilisation -– the process where nitrogen is lost to the atmosphere rather than available to the plant.