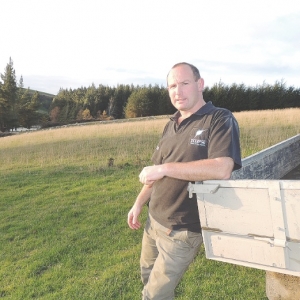 However, both accept the need for change and are already taking steps to reduce their farms’ impacts.

At Taumata, Ken Campbell says he’s “pretty lucky” to have most waterways already fenced, with extensive planting, thanks to his parents’ hard work.

They also put in plenty of ponds that act as sediment traps and an agroforestry block, without a waterway through it, is proving valuable as a dry area to keep stock in if wet conditions mean they’ll make a mess in paddocks.

However, on three lease blocks he farms, it’s a different story. Hot-wires are having to be used extensively to keep stock out of creeks.

Direct-drilling is used where possible for winter crops as “it leaves firmer ground which doesn’t pug-up as much. And we leave grass buffers round any waterways when we’re spraying off.”

Grazing is managed to minimise the chance of run-off reaching waterways, leaving gullies to graze last and only when it’s dry.

He’s already done a nutrient budget with his Ravensdown rep, but having done it for all four blocks as one; he accepts he’ll probably have to look at doing the exercise for individual blocks.

“It’s just a wee bit hard to pin-point which blocks all the production comes from.”

Soil tests and the budget show their standard fertiliser regime of 250kg/ha/year is adding about 6kg/ha/year of phosphorus over off-take. Nitrogen loss to water works out at 8kg/ha/year.

“It’s at the low end so we’re quite happy with that,” Campbell adds.

“Going forward, I can see doing nutrient budgets is going to be quite a useful tool. For example, if we do look at dairy grazing it will tell me if I’ll have a problem.”

Peter McNab, at Lochindorb Station, faces even more of a challenge as a result of the water standards ORC wants. He expects he’s going to have to fence most of the 27km of waterways on the station.

“We’re going to have to do that to minimise the risk of breaking the [water quality] standard. That’s going to be a bit of challenge, especially if we have too many more years like this with lambs at $70/head.”

McNabb already uses hot-wires to keep cattle out of the water-ways, but hillside springs are posing a particular problem. One solution is piping springs into a trough, with an outlet to a drain. But with them emerging at every 50m along some hillsides, and the difficulty of getting a digger to them, it’s a costly exercise and doing them all just isn’t going to be practical.

Fencing off the farm’s water-ways is going to present another challenge: stock-water.

“I’m keen on the idea of not having to pump water – pumps always seem to breakdown at Christmas or when you’re about to go to a rugby test. So I want a water source high enough up that the system can be gravity fed. We’ve been monitoring them, but most dried up in the summer.”

McNab welcomes ORC’s plan to measure water content at medium flows, avoiding floods, and the extension to 2020 to reach the water quality targets.

“Education is going to be the key to help farmers accept this process and what they can do when things turn to custard… like when a mob of cattle do push down a fence and get in a creek.”

He also warns fencing off areas could allow noxious weeds such as gorse to recover.

“It’s a catch 22. We certainly don’t want to see water quality deteriorate any more than it has but it’s a challenge to protect it in a way that is affordable and sustainable economically.”