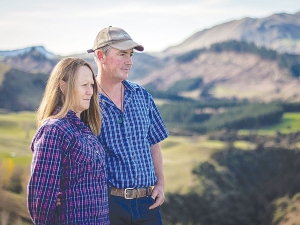 Evan and Linda Potter urge farmers to carefully review their systems and assess what effect their operations will have over the next 100 years or more.

The couple behind one of New Zealand's most sustainable farms are challenging other farmers to think three or four generations into the future when making decisions.

The call comes from Central Hawke's Bay farmers Evan and Linda Potter. The couple are the Ballance Farm National Ambassadors for Sustainable Farming and Growing, and current Gordon Stephenson Trophy holders - so they know a thing or two about the environment.

The Potters bought their 566 hectare hill country sheep, beef and deer farm - Waipapa Station - in 1997. They describe it as "a blank canvas" when they arrived at the gat with nothing more than fencing gear and a team of dogs.

Over the years, they have expanded the farm to 720 hectares and carried out extensive planting. They have also retired about a quarter of the land.

Evan says he and Linda quickly realised the large gorge running through their property was never going to be productive, so they decided to put it into the Queen Elizabeth II National Trust - with the encouragement of Hawke's Bay Regional Council.

Some farmers might feel they are giving away parts of their land, but the Potters say they worked together with the trust to figure out rules and exceptions that worked for both parties - like retaining stock and water access where they needed.

"It is a partnership, with shared outcomes, in perpetuity," Evan explains.

It wasn't a quick process, talking about six years to totally fence off the gorge and put all the arrangements in place, but the Potters say it helped to streamline their operation.

"It was the right decision because most of it was class 7 or 8 [very steep]," he explains. "Management-wise, we've taken out a mongrel piece of land to muster, as well as enhancing the beauty and biodiversity of the place so it just made sense."

He adds that by taking out that 25%, they've been able to focus on the better land and not waste a whole lot of time and money on a piece of land that's never going to perform.

The Potters are calling on all New Zealand farmers to carefully consider whether they could do something similar by undertaking a simple review of their systems and assessing what effect their operations will have over the next 100 years or more.

"Most farms could probably retire a percentage of their land with no productivity drop," Evan believes. "That said, we also recognise there's no one rule for all farms - they're all unique little ecosystems - and it's also important to acknowledge the many farmers already on this path."

As part of their efforts to retire unproductive land, the couple fenced off Waipapa's gorge and began extensive pest control - with the native flora in the gorge quickly regenerating.

"When we first came here, the gorge had a lot of kowhai trees that were nothing more than sticks. You could walk for 10 minutes and shoot 20 possums - they were under every flax bush," Evan explains.

That pest control has not only reduced the number of possums, but also the wild cats, ferrets, and rats have dropped right off. As a result, the Potters have much less chance of diseases like TB or toxoplasmosis affecting their stock.

With so much planting going on every year, Linda has taken to propagating her own natives from seeds foraged on the farm, and now aims to grow at least 2,000 each year.

She says it makes a big difference and greatly reduces the cost of buying seedlings, especially when planting thousands of trees.

Every expense adds up and the even with careful management their first few years at Waipapa - when they faced droughts and price fluctuations - were financially tough.

"We've always been pretty disciplined in terms of our finances. Sometimes that involves not biting off more than you can chew."

Evan says that while an environmental spend needs to be flexible and not compromise financial profitability, the couple see it as a fixed business expense - not discretionary. "It could cover any activity, like earthworks, water, fencing - there are no rules."

The Potters are thankful to those who have helped them over the years, whether that be with skills, advice or cash flow.

ANZ has helped to finance them over the years, and Evan reckons the most important thing a bank can do for a farmer is to take the time to understand their business. He says, at one point, he felt the bank only served one purpose - giving out loans. But now he considers his relationship manager "a vital part of the business."

ANZ managing director business Lorraine Mapu applauds the Potters' approach, and their challenge to other farmers. "With environmental regulations around sustainability, farmers like the Potters are future-proofing their operation by taking steps like this," she says.

"Their foresight, along with a diversified production model, will continue to serve them well not only environmentally, but financially. Environmental impact is something all farmers around the world are going to have to confront."

Mapu says that ANZ recognises that some of these decisions are not easy to make or implement - but seeing sustainability as an investment opportunity, rather than a regulatory burden, will ultimately see those businesses rewarded.

"New Zealand farmers have always been innovators in the face of change, and if we can adapt quickly to this new, more sustainable business landscape, we'll have a jump on our competitors in the international market."

Looking forward, the Potters are aiming to leave their land at Waipapa in a better state than when they arrived. As caretakers of the farm, feel they are responsible for its long-term sustainability.