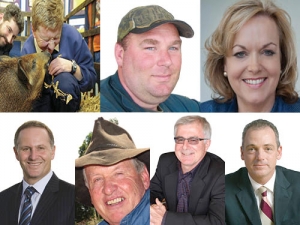 ahoggardfedfarms: So @hanskrieksafe, you sat on that bobby calf footage for 15 months before releasing it to a sensationalist TV programme? Good thing you care more about animal welfare than publicity, eh! #fullofit #meattastesgood

ahoggardfedfarms @hanskrieksafe: To misquote Nigel Powers – father of Austin – there are only two things I hate in this world : racial intolerance and Dutch animal extremists! You just hit the jackpot. #2for1 #nutjob

jcollinsminister: [email protected] for reinstating me back into the Cabinet. It makes it much easier for me to stab you in the front now; rather than in the back from the backbenches. #backinthetent

johnkeypm: No worries @jcollinminister, but I might borrow one of those stab-proof vests you introduced to the force last time you were police minister. #watchingmybackfrontandsides

johnmcarthymie: It's great to see that MIE will continue fighting the good fight in the meat industry – despite more resignations from its executive than Colin Craig's political party. Actually I wonder if Colin is available to join MIE? #whatisthepoint #whatdowedonow #whoisleft #whocares

tgrosserusambassador: I'm off to the US of A to try to negotiate with the likes of Donald Trump and the gun lobby – much more rational proponents than trying to get sense out of the anti-TPP fanatics like Jane Kelsey or climate change doomsayers in the Green Party! #bliss #solongsuckers