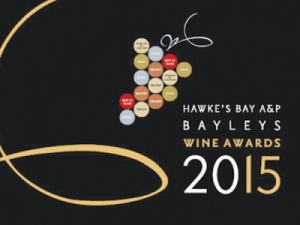 Entries open on July 1, 2016 and the organising committee are hopeful of tipping last year's near record numbers.

Now in its 16th year the event has grown from its modest beginnings to become one of the region's most significant celebrations of our winemaking prowess.

The objectives of New Zealand's longest running regional competition are to identify, promote and celebrate excellence in wine making in the Hawke's Bay region and in doing so endorse the contribution of viticulture to the economic, cultural and social wellbeing of Hawke's Bay.

Entries open on July 1, 2016 and the organising committee are hopeful of tipping last year's near record numbers.

Warren Gibson, chief winemaker Trinity Hill was last year appointed chairman of judges and is putting together the judging lineup.

"I'm very pleased to be involved with continuing success of the 16th Hawke's Bay A&P Bayleys Wine Awards, having been one of the original judges in 2001," says Gibson.

"I will be attempting to maintain the previous high standards and success of the show. Also, as chairman of judges, I have encouraged the committee to enable me to make some small positive changes for the 2016 awards and then hopefully onwards.

"In Hawkes Bay, we biasedly or otherwise believe that our region has the most potential for growing and making a wide range of international wine styles.

"A number of these wine styles have the ability to age and develop into classic wines of the world. The upcoming 2016 awards will feature a new class rewarding such wines of provenance.

"Using the model that has been successfully implemented in many Australian shows and some more recently in NZ, this class will recognise wines that reflect their region, lineage and longevity. Three wines of the same label spanning a minimum of 10 years of age will be judged.

"The label is the winner, not a particular vintage and there will be just one award given. This award will replace what was known as the Museum class. The time is right to begin to award the heritage and provenance of the wine rather than the individual vintage.

"A further change in the judging will be to the internal scoring system which previously was marked out of a possible 20 points. Many of our international markets now use (or even require in some circumstances) rankings out of 100 points. As an example, a 95 or above points is equivalent to a Gold medal, 90 to 94 a silver and so on...

"To come into line with these international standards, the 2016 show will become the first NZ wine show to use this system of internal scoring. The results to the exhibitors will remain as per the medal/trophy system of the past.

"Hawkes Bay has recently completed its 4th excellent vintage in succession. The 2016 Hawke's Bay A&P Bayleys Wine Awards will be a perfect opportunity to showcase this range of great vintages to a diverse panel of wine judges.

"Without the ability to disclose the judging panel entirely at this early stage with judging not until late September, the team will be made up of at least one high profile Wine commentator from one of our major markets.

"The remainder of the two panels will largely comprise wine experts and commentators from NZ that will hopefully help foster the strengths of Hawkes Bay wine in their own spheres.

"To balance the panels there will be one local winemaking judge to give regional perspective. This judge will importantly have no personal conflict of interest with any of the wine entries.

"One judge that can be disclosed is Dr Sue Bastian, Associate Professor in Oenology and Sensory Studies at the School of Agriculture, Food and Wine, The University of Adelaide. Sue will also spend time during her visit mentoring Wine students at the Eastern Institute of Technology."

The awards dinner, with a couple of surprises this year, will be held on October 18, 2016 in the Waikoko Gardens at Showgrounds Hawke's Bay, hosted by the Hawke's Bay A&P Society.