2018 predictions: How will the global wine market change? 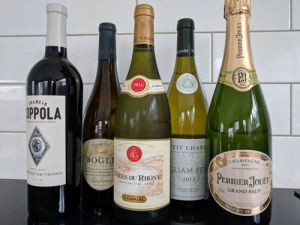 Wines like these may be harder to source after a particularly difficult European vintage in 2017 and the Californian fires.

Last year didn’t yield a great harvest on an international scale, and some economists are predicting that in 2018 a global wine shortage may hit.

There are several key drivers behind the wine industry’s predicted volatility this year, all of which should be understood by Kiwi winemakers.

The environmental impacts on various 2017 vintages are notable, particularly in Europe – which had the worst season in that year since 1982. The continent had an extremely cold spring – Burgundian grape growers were unusually forced to deploy fans to protect their crops from frosts, for example – and also had heavy hailstorms to deal with. Soon after the region had droughts all throughout the summer, culminating in a grape supply that experienced significant damage. The result is estimated that France, Italy, and Spain (combined) will only have produced 14.5 billion litres of wine during 2017, which is a 16 percent drop from 2016. Italy was hit the worst during 2017, with a production decline of 21 percent (France and Spain both saw 15 percent falls). In Sicily, grape production was a third lower than 2016, and the culminating effects will be up to 10 percent price rises for some wine varieties. Such a disastrous harvest upon three of the countries that together produce half of the world’s wine will directly affect wine prices for the consumer.

Consumer wine prices in the UK could rise by a quarter as Britain’s exit from the European Union gets closer. Kym Anderson and Glyn Wittwer, two Australian economists, have produced a model that suggests “by 2025, the price of wine for UK consumers will be 22 percent higher, the volume of consumption 28 percent lower, and the value of UK imports 27 percent lower” than it would be without Brexit, according to the Financial Times. This largely owes to the devaluation of the pound (GBP) during the nearly two years since the vote to leave the EU happened, alongside slower-than-usual economic growth which has pushed up costs and simultaneously cut demand. As the UK accounts for 20 percent of the world’s wine imports, such an effect will be felt worldwide in 2018 and beyond.

Another, more irreverent factor could be problematic for the wine industry in 2018: baby boomers’ declining average income. With retirement age hitting for the bulk of people born in the 1950s now, the international wine market may begin taking a hit as this generation is the largest drinker of wine in the world. Economics professor David Jaeger of City University of New York’s Graduate Centre says, “The aging of the baby boomers and their transition into retirement might lead to a reduction in wine consumption as their incomes decline. Overall, then, I would expect wine sales will not continue to grow at the pace they have in the recent past or even level off.”

Such economics news from Europe has received less media coverage than what happened in the US last year.

After the California wildfires destroyed many vineyards at the end of the 2017 North American summer, the economies of wine counties Napa and Sonoma were put in jeopardy. Fires on both sides of the valley ripped down the hillsides and destroyed unpicked, almost ripe grapes across many of the region’s wineries – around 90 percent of the harvest was complete at the time.

In a lot of the cases where grapes remained intact, they were tainted by exposure to smoke (which is to grapes like sunburn is to human skin). Not all grapes exposed to smoke taint are unusable, but Australian wine research (comparing Adelaide’s wildfires) has found that grapes exposed to smoke for just 30 minutes result in an undesirable aroma for the subsequent wine production.

Some winemakers will be attempting to filter out smoke aromas and adding powdered carbon to continue separating out any smoky compounds, although it’s unsure whether or not this will work. Eleven wineries were destroyed in the summer 2017 fires, contributing to the 30-60 that were seriously damaged. Napa and Sonoma wineries now face the task of dealing with their insurance companies over the value of grapes lost, the “Napa Valley average” for insurance purposes is up to US$7000 per ton. High-end wine brands will be hardest hit, e.g. the Cabernet Sauvignon growers that have crops valuing more than US$12,000 per ton. The effects of this horrific Act of God goes further than crops, too.

The Northern Californian wine country is an economy of its own: employing thousands of workers and providing financial security and housing to the whole area.

Just like New Zealand, California also have a very low supply of affordable housing and the result will be vineyard workers are forced to leave and seek work elsewhere – further adding challenge to wine production. That aside, most of the Northern Californian wineries suffered no damage and while their 2017 vintage may not be affected, tourism numbers have plummeted and all wine brands’ bottom lines will be felt as a result. As for how this will impact – and probably increase – the consumer price of Californian wine, remains to be seen.

However, the US (and California in particular) will see some positive financial movements for the wine industry in a completely unrelated matter. Owing to the US Senate’s tax reform, led by President Trump’s campaign promises, the wine industry is going to receive significant tax cuts.

According to Wine Spectator, American wineries can expect between a 10 and 65 percent tax break, depending on the volume they produce. Tax credits that were previously only available to small wineries are now available to larger ones.

Theoretically, this means some US wineries could lower their prices to the consumer, or wineries may take a healthier margin. Bobby Koch, President and CEO of Wine Institute believes it will give a lot of relief to Californian winemakers, which produce 85 percent of all US wine. “We are the epitome of value-added agriculture and our wine and vineyards represent a long-term commitment that is uniquely tied to the land, generating jobs, tax revenue, trade, tourism and international appeal,” he said in a press release.

The way all of these international markets will affect New Zealand winegrowers remains in a crystal ball, though a shortage of Northern Hemisphere wine in the global market could work for us. For example, it could be used to change the dynamic of price negotiations and become a “seller’s market”. Kiwi winemakers may be able to use this leverage to negotiate more favourable margins on exports – something that many will find a welcome change, considering the length of time the wine world has been considered a market that has been overly favourable to the buyer.