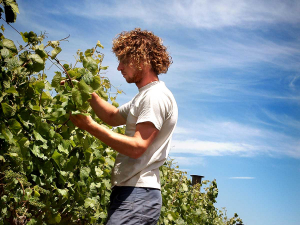 Pete Chapman and a mid-row crop of Phacelia.

Pete Chapman loves to see an abundance of cherries at his family’s North Canterbury vineyard.

Not because he’s anticipating sweet fruit, but because this sentry of trees is designed to foil the attacks of grass grub beetles, which eat young spring growth on vines. “I love them the way an army commander loves a successful booby trap,” says the viticulturist at Terrace Edge.

As well as the cherry tree guard, the family have carefully planned plantings in paddocks beside the vines, with species designed to limit the proliferation of the grubs. “We see in nature, that everything can work together if given the opportunity,” says Pete of imitating the biodiverse ecosystems of nature.

They have also used cover cropping within the vineyard since 2008, initially intended to attract beneficial insects to reduce leaf roller caterpillar. “However, since 2012 we have been planting many different species to bring the soil alive, enhancing beneficial microbes and maintaining and improving the structure and fertility,” says Pete of the estate, which won Vineyard of the Year at the 2018 New Zealand Organic Wine Awards. “We have been applying less fertiliser, but getting better soil test results due to the cover cropping.”

Cover cropping takes time and money, “but I believe it is definitely worth it”, says Pete. “There is a lot of learning to be done on what works on each individual site. Sometimes we have had cover crops fail due to really dry conditions or frosts – but you learn each time.”