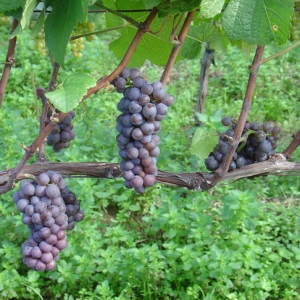 Pinot gris on the vine.

The vineyard’s clay soils have played a significant part in establishing the region as a premium area for aromatic wines, so it is a great testimony to those involved in its establishment that Aronui Wines has picked up the Trophy for Champion Pinot Gris at the Royal Easter Wine Show Awards on Saturday night.

“We had a really good growing season in 2014 and were quite confident that this was going to be a great wine.  It’s nice to see the rewards coming after a few years of making this Pinot gris, as we gain a better understanding of the style that suits our Whenua Matua vineyard.  The lusciousness and nice natural acidity have come about as the vines age, and we have also gained better control over the winemaking process with a stable winemaking team and our own winery,” says Taylor.

“Terry Dunleavy, the Grand Old Man of the New Zealand wine industry, got up to specifically say that it was the first time a trophy had been accepted in Te Reo, and how great that was,” says Mike Brown, general manager sales & marketing, Kono NZ.

Whenua Matua vineyard sits on Tenths Reserves land.  A key component of the New Zealand Company colonisation scheme (1841) was the obligation to reserve one-tenth of all land purchased for the future prosperity of the Maori owners.  Although not honoured at the time, Wakatu Incorporation re-acquired the land lease with the intention of planting the vineyard.