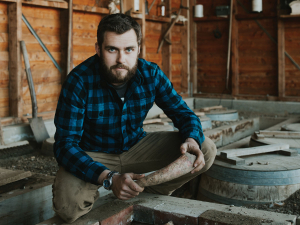 28-year old Simon Gourley, viticulturist at Domaine Thomson Wines, won the title which was announced at the recent Bragato Conference in Napier.

As part of the competition the six finalists had to present a speech on the topic of “The year is 2050 – what does the wine region look like in your region and what does your average day at work look like?”

Gourley questioned whether vineyard land may give way to essential food production for the growing global population, and suggested if vines remained in Central Otago the Pinot Noir grapes would be replaced by heavier red wine varieties more suited to a warming climate. While he expected robotics could make some jobs easier, he said he would prefer to rely on the basics. “You can’t beat a spade,” said Gourley when he returned to the 14 hectare vineyard he manages near Cromwell.

Growing up in Invercargill, Gourley went to Lincoln University in 2009 to study for a bachelor’s degree in Viticulture and Oenology, focussing on soil science.

A summer practical placement at Two Paddocks in Central Otago became a seasonal job over the next five years, where he gained valuable knowledge and experience working with viticulturist Mike Wing, a previous runner-up for the national Young Viticulturist title.

After a stint of travelling and working in a large commercial vineyard in Australia, Gourley returned to Central Otago working three vintages at Central Otago Wine Company (COWCO) with winemaker Dean Shaw. “I always thought that a viticulturist needs to know both sides of the industry, and there’s always a real gap between viticulture and winemaking, which I wanted to fill.”

It was then a natural progression to take up the new viticulturist position at Domaine Thomson 18 months ago, which had been previously run by contractors. “I knew the wines (Domaine Thomson was a client of COWCO), and I really like the wines produced here,” he said, adding that one of the owners, David Hall-Jones, was also a Southlander. The fact that they owned vineyards in Burgundy was undoubtedly attractive, as was the opportunity to be working in an organically run property. Whilst not certified organic, the property embraces biodynamic and organic practices, which Gourley was keen to learn more about as his university training had been “very conventional…pretty old school.”

“I presume that may be changing now, as consumers want organic and traceability in all of their products. It won’t be long until we don’t want to use chemicals.”

Since moving to Domaine Thomson he has been focusing on converting the vines from spur to cane pruning, improving vine health and building soil structure.

He says the experience he’s gained and the people he’s met through the regional and national contests has been invaluable and he’s looking forward to helping other young people get involved. “You find out a lot about yourself, how much you know. You’re really tested on your own knowledge and leadership skills.”

As well as practical tests, finalists had three weeks prior to the competition to complete their AGMARDT research project to prepare a biosecurity plan for their vineyard.

Biosecurity manager at NZW Dr Ed Massey said the reports provide valuable information and Gourley’s has been shared through the members’ portal on nzwine.com.

He described the fragility of an unprotected business and its risk in the case of a biosecurity outbreak. “The best biosecurity tool is awareness and creating an environment where biosecurity is moved off everyone’s ‘to-do’ list and on to the day’s plan,” he said.

His plan focused on the risks of introduction of mealybugs as vectors of Grapevine Leafroll-associated Virus Type 3 (GLRaV-3), Brown Marmorated Stink Bug (BMSB), and Harlequin Ladybird. “It is estimated that an infestation
of BMSB could cost New Zealand $3 billion in exports. We need to be proactive not reactive to ensure our business’s longevity.”

As the winner of the Bayer Young Viticulturist of the Year, Gourley takes home a prize package of a Hyundai Kona for a year, a $5000 Ecotrellis Travel Grant, Bahco golden secateurs, a leadership week and cash.

He hit the ground running with big boots to try to fill - as he goes on to represent the wine industry in the NZ Young Horticulturist of the Year Competition in November, won last year by viticulturist Annabel Bulk from Central Otago.

Being up against representatives from all sectors of the horticulture industry, Simon thinks his biggest challenge will be in the floristry category. He’s hoping for some tips from his partner Ysra, who is a florist, “…although she thinks I’m colourblind sometimes.”

Second place went to Ben Richards from Indevin in Marlborough, with George Bunnett from Craggy Range in Wairarapa placed third.