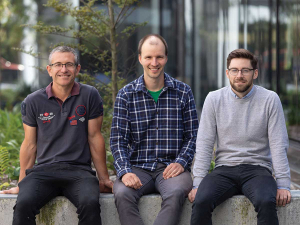 Drs Brendan Darby and Matthias Meyer have come up with a unique way of analysing wine samples during fermentation.

Wine samples have always been able to be measured during this phase of the winemaking process, but in the past it has taken considerable time as samples have to be filtered to remove all turbidity.

Darby and Meyer’s new spectrophotometre eliminates that filtering necessity and can provide real time analysis on colour, tannins and phenolics within 10 seconds.

The CloudSpec UV-Vis is a result of Darby’s PhD, which he completed in 2016. His aim was to see if he could come up with a system that would allow cloudy products to be measured for chemical compounds. That has never been possible before without filtration.

“If you take a liquid and shine a light through it, you get chemical information,” Darby says. “But if anything is cloudy, such as coffee, juice or fermenting wine, there are all these particles that will scatter the light. That is why all these cloudy liquids are so hard to measure. It’s basically like trying to hear a tiny whisper in a room that has a background of generic noise. Almost impossible.”

His research found a way to circumvent those large light scattering particles, and a number of papers were published. But once he had handed in his thesis, Darby decided he wanted to validate his discovery and began considering commercial applications. He and Meyer approached different industries and after a chance meeting with Andy Frost at Pernod Ricard in Marlborough, the newly established company Marama Labs began trialing the CloudSpec UV-Vis on wine samples.

“We learned a bit about the wine industry and about how colour, tannins and phenolics are core attributes of a wine. You can measure those using current instruments, but during fermentation you have really cloudy liquid which means you have to do lots of filtering and clarification steps to measure them. We discovered that as a consequence, wineries don’t seem to measure these attributes during production, which was eye opening to us.”
Pernod Ricard expressed interest in the CloudSpec UV-Vis, but needed to ensure the machine would work in a winery environment.

Samples of unfiltered wine were sent to Marama Labs, they were tested and the results were promising Darby says.

“They suggested we start some trials. We got funding from KiwiNet in 2016 and Pernod Ricard contributed lab space and we built a prototype for the 2017 vintage.”

Darby and Meyer spent two weeks in the lab during vintage, which they say gave them important knowledge of what any ensuing machine needed to look like.

“We realised that we couldn’t just build an instrument in our ivory tower in Wellington and hope it would apply to a winery. There are all the dynamics and the day-to-day business that we realised it had to suit.”

The value of being able to determine colour, tannins and phenolics so early in the winemaking stage could provide major benefits for wine companies Darby says.

“What is going to be valuable is monitoring your ferment to see how things are extracting, which will inform the cap management practices, being able to see if something has been essentially extracted and being able to move it on earlier than you might have.”

There is also the long-term goal of being able to take the testing even further.

“One of the real areas where we think it could be valuable, is in measuring these attributes in grapes early on, to provide an early indication of quality. Being able to characterize your juice, prior to it coming into the winery, maybe at reception when the grapes are coming in, will allow winemakers to characterise the qualities. Are the grapes the same colour as last year, are the phenolics the same? Wineries will be able to use that information to work on blends right from the start. The early prediction is a little bit long term though.”

Darby says being able to move his research findings from the theoretical into the practical couldn’t have happened without funding from KiwiNet back in 2016 and more funding from Viclink and external investors last year.

“This discovery could have just sat on the shelf and gone nowhere but we were lucky enough to have KiwiNet funding and someone like Pernod Ricard to say, well you can have access to our data and process so you can turn this into a relevant product.”

The wine industry is not the only one likely to benefit from the CloudSpec UV-Vis. Other industries such as paint manufacturing, milk production and water testing are also likely to be keen to get their hands on the machine, given all their testing is on cloudy products.