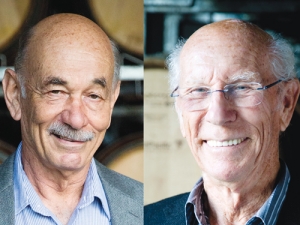 “From the foundation of Babich Wines in humble circumstances in 1916 by their Croatian immigrant father, Josip Babich, his sons, Peter and Joe, aided by their sisters, have created a wine company now known round the world for the quality and consistency of its wines,” said Terry Dunleavy, founder of the Royal Easter Wine Show.

Babich Wines is one of New Zealand’s leading wine exporting companies, with sales to 35 countries around the world on a significant scale. This was part of the reason for the recognition. But the contributions to the New Zealand  wine industry of both Peter Babich MBE, FWINZ and his winemaking brother, Joe Babich ONZM, also contributed.

Peter joined his father in the family vineyard in 1948 at 16 years old. In 1989 he was awarded an M.B.E. for Services to New Zealand viticulture and wine, followed by being elected a Fellow of the Wine Institute of New Zealand Inc in 1996. In 2013 he was awarded the Sir George Fistonich Medal in Recognition of Service to New Zealand wine at the New Zealand International Wine Show. Among his many other contributions to New Zealand wine, he has been a leading advocate for Category II (medium-sized) wine companies and he remains actively involved in the business as chairman of Babich Wines Ltd; “My retirement a few years back didn’t last long,” he likes to joke.

Joe Babich was the company’s winemaker for 35 vintages. He joined the family business in 1958 when its annual grape crush was approximately 30 tonnes, and the predominant production was fortified wines and generic whites and reds. Joe was a founder and member and active leader of the Young Winemakers’ Group, which helped to raise the standards of New Zealand winemaking in the 1970s.

Both men progressively modernised the winery and pioneered vineyards in regions outside of Auckland, including the Irongate vineyard in Hawke’s Bay; home to the grapes for one of New Zealand’s first Chardonnays to be fermented and matured on its yeast lees in barrels.

Joe was recognised with the Winemaker of the Year Award at the Royal Easter Show Wine Awards in 1994 and awarded the Sir George Fistonich Medal for service to New Zealand wine at the New Zealand International Wine Show 2013.  In the 2015 New Year’s Honours List, Joe was appointed an Officer of the New Zealand Order of Merit (ONZM), for services to the wine industry.

He was a former wine judge at the Royal Easter Show Wine Awards, and later became Chairman of Judges at the Air New Zealand Wine Awards.