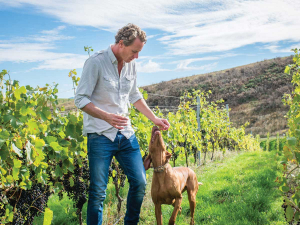 Dave Clouston amid Syrah, one of the varieties used in the Two Rivers Rosé.

“It was great for Pinot Noir and really, really challenging for Rosé,” says Two Rivers winemaker Dave Clouston, who worked swiftly to stop the deeply red fruit from tinting his Isle of Beauty Rosé, known for its quiet blush.

If any New Zealand winemaker was ready for the task, it was this one, thanks to two decades of steadfast dedication to the style, including three vintages in a remote corner of Corsica, distilling old world ways. In 2004, Dave returned to his home province, determined to approach Marlborough fruit with a Mediterranean perspective, and become “New Zealand’s greatest Rosé producer”.

The deeper colour of the 2019 Rosé - still a pale beauty against many of its Kiwi counterparts - did little to dampen the ardour of wine judges. The wine (formally known as L’Ile de Beauté after the aforementioned Corsican corner) was named Champion Rosé at the recent Cathay Pacific Hong Kong International Wine & Spirit Competition, and trophy winner at the 2019 New Zealand Wine of the Year Awards. In the latter, the wine faced far more competition than any other year, with 98 Rosé labels on the table, compared to 68 in 2015. Many of those would have been the “fruit bombs” long associated with the style in New Zealand, and Dave is impressed the judges rewarded the Isle of Beauty’s far more subtle and savoury character. “It’s great for New Zealand Rosé that they are looking past what they traditionally looked for, which was a bit of sweetness and a bit of fruit.”

New Zealand Rosé was traditionally dark in colour, high in alcohol and sweetness and often made from Merlot grapes unable to hold enough acidity, resulting in peaches and cream qualities, says Dave. When he returned to New Zealand, he looked instead to top tier Pinot Noir from Marlborough’s Southern Valleys, to make bone-dry and prettily pale Rosé, with savoury complexity in lieu of strawberry sweetness. In 2015, Two Rivers bought its Brookby Hill Vineyard, where close plantings on steep, clay slopes were exactly what he’d been searching for.

The resulting wine has been devoured by the domestic market, with 100 percent growth year on year from 2013 to 2017. Increased competition on the domestic market has eased that trajectory, with Two Rivers Commercial Director Jason Yank noting that “every man and his dog is making Rosé these days”. But the company is still ramping up its production. “We are making more Rosé than we did last year and we are probably double what we were two or three years ago… We might not grow the same way we have in the past few years, but there is still growth.”

Dave has spent time in Provence over the past two years, working with winemakers in order to perfect his offering. “I like that every other New Zealand winemaker will be in Burgundy or Sancerre and I’ll be the only Kiwi winemaker in Provence, learning about the origin of Rosé, then bringing it back to New Zealand and implementing it with our fruit source in Marlborough.”

He was there with his young family in 2018, and travelled to Provence again last year with Jason, to attend a technical conference at which Two Rivers was the only new world wine. Lined up against more than 60 pale pink Rosés, he admits his was a deeper tint, but notes it also stood out for natural acidity and aromatics. “On a global scale, we have to educate people that New Zealand doesn’t only do great Sauvignon Blanc and some really good Pinot… it also does great Rosé.”

He returned from the visits resolved to follow the best Provençal producers by using more than a single fruit source. “To get a more complex and complete Rosé - a sophisticated Rosé - you need a multiple of varieties.” That’s meant planting up a storm at Brookby Hill, so the Rosé blend can draw from Cinsaut, Mourvèdre, Grenache and Vermentino, Syrah, Roussanne and Viognier, as well as Pinot Noir. Each variety plays a part, whether that’s acidity, savoury characters, floral notes or fruit weight and texture, and “the wine has more concentration and structure as a result”, says Dave. Crafting the award-winning 2019 vintage was a world away from making Sauvignon Blanc, where he simply picks the fruit and keeps it as pure as possible, with little manipulation. “Rosé is like a blank canvas, like Chardonnay.”

While Rosé is a “tiny sliver” of exports compared to New Zealand Sauvignon Blanc (see Think Pink side box), that’s not the story at Two Rivers, which sells similar amounts of the two. In fact, Rosé is close to outdoing its Sauvignon sibling under that label, although the style is still dwarfed by Sauvignon Blanc in Dave’s lower priced Black Cottage label. The focus for Two Rivers Rosé to date has been the domestic market, because high-end Pinot Noir fruit makes the Rosé expensive to create, limiting demand on the international stage, where it is up against wines from Provence, says Dave. “It is a bit like Chile making premium Sauvignon Blanc - they are up against Marlborough.”

But Two Rivers is one of several producers flying the flag for New Zealand Rosé around the world. And, he’s confident that being recognised as New Zealand’s best Rosé producer will allow his label to make headway on the international market. “People look for a country’s best version - your Chardonnay, Kumeu River; Sauvignon Blanc, Cloudy Bay; Pinot Noir, Felton Road… these iconic producers.” His goal has long been for the world to hear ‘New Zealand Rosé’ and to think ‘Two Rivers’. “That’s a massive company focus - our goal is to be the benchmark for New Zealand.”

A Picton predator free project has teamed up with a Marlborough winery to help bring bird song back to the Sounds.