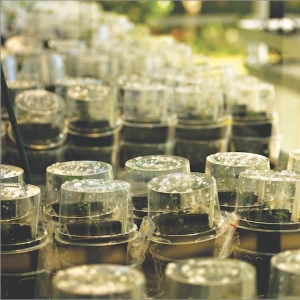 Vines are due to be released from quarantine

You may well think that will be an impossibility, because the name Prosecco is protected and can only be used by producers within a designated area of northern Italy. While that is true for any wine imported into the EU, a WTO ruling in 2013, has deemed Australia (and now New Zealand) can produce Prosecco, although they have to rename the ensuing wine Glera if they wish to export to the EU.

Dr Susan Wheeler, a viticultural scientist with her own horticulture consultancy has spent the past four years working on importing Prosecco grapes into New Zealand. Her hard work is about to pay off in January, when the first vines will be released from MPI quarantine.

The clonal material came directly from Australia, where Prosecco has been planted in increasing numbers since the early 90s. But as she says, the story of the grape in that country goes back much further.

“It was first imported into Australia by an Italian immigrant just after the second World War,” Wheeler explains. “Nobody actually planted it though and basically it sat in his backyard in Adelaide. In the 90s when others in the industry realised it was there in Australia, they started planting it. The researchers did DNA testing on the vines and verified that it was in fact true Prosecco. When the Italians realised that, they decided they would send over some of the new clonal varieties to be sold in a commercial vineyard to ensure they got royalties.”

Between the early 90s and late 2000’s, the worldwide popularity of Prosecco soared, far more than had ever been predicted. Which led the Italians to try to retrospectively change the name of the grape, to allow the style of wine to become protected.

The Winemaker’s Federation of Australia claimed that was not appropriate, given the grape is and always has been known as Prosecco. Their case to the WTO in 2013, was successful, with the finding claiming that the term Prosecco was that of a variety that had been used in Australia since it first arrived, and that it was the “only name that Australian producers were legally permitted to use in respect of the relevant grape variety”.

That legal bid by the Australians has ensured that Wheeler’s efforts to produce Prosecco vines, under the legal name, is guaranteed. She did however seek and gained permission from the Italian authorities to import Prosecco clonal material via Australia.

“For some reason I have always liked it. It’s low alcohol and quite festive. We lived with a lot of Italian immigrants and they would always have it around and it was the one variety that I kept thinking – ‘why isn’t that here in New Zealand?’”

Once she had the permission from the Italians, and clonal material from Australia, back in 2013, the Ministry for Primary Industries (MPI), responsible for the quarantine process, took over.

“It comes in as a dormant stick and MPI take it from there. They have been responsible for generating multiple plants, which are all on their own rootstock at this stage. They are about to be grafted onto approved rootstock that has come from Geoff Thorpe at Riversun Nurseries. In some ways it has been a bit abstract for me, as I don’t have any actual plants in my hand. The closest I get, is when I go down to MPI and admire them in the quarantine glass house, which makes me feel like a proud mother, viewing her child through the nursery window.”

Once those plants are cleared from quarantine in January, Wheeler will end up with a handful of vines, which she will then need to generate into plant material.”

She already has one grower in Gisborne really keen to plant the first vines available and a number of others around the country have expressed interest.

“It will be interesting to see how many parties are keen,” she says. “It is an easy variety to grow, although it is a heavy cropper. It has an early bud burst, so that may be a concern in certain New Zealand conditions. The other thing is that it’s prone to mildew, because the bunches are so big. But on saying that, the clonal variety we have is less susceptible than the old Prosecco planted in the early days.”

While there is bound to be a bit of trial and error before the perfect sites are discovered, Wheeler is in no doubt of the likely success of the wines.

“You can make it in a number of different styles, so it’s interesting to work with. Also it’s popularity is growing; people are starting to seek it out. The novelty of being able to make it in New Zealand is kind of cool.”

For more information on the Prosecco vines, contact Susan at This email address is being protected from spambots. You need JavaScript enabled to view it.

Minister zooms in on trade

Damien O'Connor in his dual capacity of Agriculture and Trade Minister, officially launched a 250 page report on barriers to horticultural trade before a group of about 60 industry representatives in Wellington last week.

Are EU and UK doing the dirty of NZ?

The New Zealand meat industry could be hit by fallout from the tense and divisive Brexit negotiations.