Debbie Sparks and her Tiki family 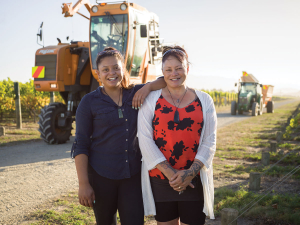 "Vineyard work wasn't my thing," says Debbie Sparks, looking back at her first impressions of pruning in North Canterbury.

“When I came out it was a dusty hole and I thought, ‘I don’t want to work out here’.”

Fast forward 13 years, and the Assistant Vineyard Manager of Tiki Wine’s Waiata vineyard has truly changed her tune – “it’s a beautiful place”, she says at the end of the 2021 harvest. “Because we have been here for so long we have a passion for the land. We don’t own it, but a lot of love goes into this place and it shows with the grapes.”

The work continues to engage her, she says, noting that in the past boredom would see her leaving jobs, from fishing boats to factories. “Every job here is interesting to me and I love it… If I knew about this work earlier, I would have been into it.”

She also loves working with the owners – Royce and Sue McKean – and her crew, from Vineyard Manager Mark Eder and a team who have been there more than a decade, to the small band of Recognised Seasonal Employer (RSE) scheme workers she’s always looking out for. “I have a really good team, and it makes the job so much easier.”

These days that team includes her daughter Jarnieze Taingahue McRoberts, who works fulltime with Tiki. “Basically, if you were talking to her, she has been here since she was 12 - pruning and bud rubbing,” says Debbie, whose five children all worked on the vineyard in weekends and school holidays. “It was a big family so money wasn’t always there. If they wanted anything, like first cars and stuff, they pretty much worked for it.”

When Jarnieze finished high school at 17, she didn’t know what to do next, so joined Debbie at work. Now 23 and her mum’s 2IC, Jarnieze has competed in a Young Viticulturist of the Year regional competition and realised “she has the passion for it”, says Debbie. “She knows this place inside out.”

Debbie’s own work at Tiki started with bud rubbing and pruning, as part of a contract gang. After a couple of seasons, she started driving tractors, then moved on to harvesters. “I basically drove everything in the vineyards.”

She learned from everyone around her, and from bringing up a big family, calling herself the matriarch of Waiata, with a mother’s eyes on the work and welfare of her people. That includes ensuring the wellbeing of the RSE workers, who she considers part of the family. “Recently because five of my boys have been here for a year now, we decided to take them fishing up by Kaikōura. Seeing their faces and spirits lift when they reached the water and could get their seafood was so rewarding.” She also ensures there are hearty crockpot meals waiting for the seasonal workers when they get back from pruning, after realising they were resorting to cheap and easy food with little nutrition.

This year yields were down in North Canterbury, but with only one day of rain it was the driest, cleanest, and easiest vintage she has done. She still misses being in a harvester come vintage - “now I am driving the computer” - but has also relished the chance to do more than she ever expected. “I would never have thought I had the ability and skills to do a management job. I have been very lucky to have Sue and Royce and Mark Eder to help develop my skills… I have grown heaps,” she says. The chance to pass that on to Jarnieze and her other children makes it even more rewarding. “Because they see it and know ‘if mum can do it, you can pretty much do anything’.” Debbie has no plans to leave this “perfect” office. “I will probably be here until I retire.”

Tiki is a finalist in the New Zealand Workplace Health and Safety Awards 2021, with winners to be announced on 1 June. The company is one of three finalists in the site safe New Zealand best health & safety initiative by a small business category. Tiki Assistant Manager Debbie Sparks says the entry is for the work the company does to ensure the safety and wellbeing of its Ni-Vanuatu Recognised Seasonal Employer scheme crew.