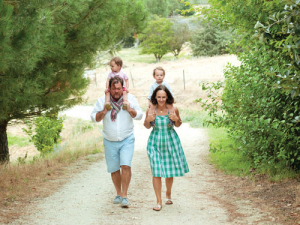 She may be a relative newcomer to the wine industry, but the owner of Domaine Rewa in Central Otago has a vision for the future.

Philippa Fourbet is a Kiwi who has lived in London for the past 15 years working in investment banking.

She bought, sight unseen, the 5.5 hectare vineyard and olive orchard established on the foothills of the Pisa Range near Cromwell back in 2010, and most of what she knows she has “learned organically”.

The property coincidentally has a beautiful stone house built by the previous owners, which led to a “lovely turn of fate…. It’s quite a French property,…” says Fourbet who later met and married a Frenchman.  The couple, along with their two-year-old twin boys, made the shift to Central Otago on New Year’s day this year.

Yannick Fourbet is a pre-eminent potter whose decorative French Anduze pots have adorned the Palace of Versailles in Paris, the house of Christian Dior and have been exhibited at the Chelsea Flower Show since 2011.  Which is where the couple met in 2013, while Philippa was sourcing pots for her vineyard. She fell in love - admittedly it was with the pots first… -  and the rest is history.  Philippa moved to France in 2015 where they were to stay for a while, but a year ago they decided to move to New Zealand.

While she quips her only previous wine experience was drinking it, Fourbet is a talented and highly motivated woman with a worldly view and an “unwavering belief in sustainability.”

But while she’s still on a huge learning curve in the world of wine, she is keen to use her background to help open doors for other New Zealand wine growers.

She recently accepted nomination to stand for the board of NZW, offering a “fresh independent voice” on issues including water, employment, and access to global markets.

(Voting results were not in as NZWinegrower went to print.)

“I would like to see New Zealand wine strive towards the premium end of the market.  This is because I believe that more sustainable, premium and niche equates to a more valuable product and this is the way we can best position our industry for the generations ahead,” she says.

Coming from a farming background - Philippa grew up in the small Otago town of Lawrence - she’s always had one foot planted firmly on the ground.

She praises the support of her viticulture team of Grant Rolston and Gary Ford of Vinewise, who helped transition Domaine Rewa to biodynamic certification, and winemaker Pete Bartle of Vinpro, who knew the vineyard from when it was planted some 20 years ago.

“Grant and Gary are passionate about organics which fits with me.... they are tasked with producing the best fruit they can. I am of the belief if Pete makes wine he likes it has the best possible chance of being good.”

Almost half of the vineyard is planted in Pinot Noir, with the remainder in roughly equal portions of Chardonnay, Pinot Gris and Riesling.

Distribution has been established in New Zealand and Australia, with smaller volumes going to Japan and Hong Kong, and Sweden.

Meanwhile Philippa works from Central Otago in global banking business servicing international investors, which involves a couple of days each week travelling, juggling her commitments with family, and supports her husband’s pot business.

“I am resolutely committed to building an intergenerational business for Domaine Rewa,” she says.

When scientists Marilyn Duxson and John Harris purchased a small section near Wanaka almost 20 years ago, they planned to build a ski holiday house to spend weekends away from Dunedin.