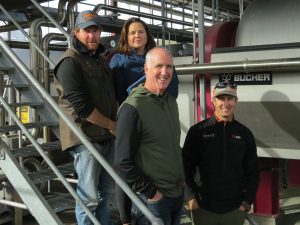 The wine industry needs a more collaborative approach to labour, says New Zealand Wineries Chief Executive Lou Miller, as she stares down the barrel of a labour-short vintage in Marlborough.

"There are so many variables and everyone is fighting for the same staff," she says. "I really think there needs to be some industry thought in how we move together as a region, because there's no point in getting the grapes grown if we can't process them."

Those four 2021 interns will remain this year, bringing their experience to higher level roles, and four new interns will be recruited to start this summer, in the vines and winery. "What this does is create full-time work for people across the industry," says Lou. "It also gives them a chance to try different parts of the industry and get a feeling for what they would prefer." She is happy that each of the interns remarked on a similar culture across the three businesses. "We are all family oriented and treat all our people equally, which is important."

Kirsty Trolove, owner of Only Human - HR & Recruitment, developed the scheme last year, and is excited to see it rolled out again as a model of how industry can evolve. She says Covid has "fast tracked" responses to both labour shortages and the gig economy, and the wine industry has to start thinking differently. "Those that move early and think about things differently will win in the long run."

Lou agrees, saying the wine industry has been heavily reliant on a transient workforce for vintage, "and it only takes what has happened with Covid to upset the apple cart and make you think creatively about how you can reduce your reliance on that labour". Many of the backpackers and international cellar hands who were still in the country for vintage 2021 have left, reducing a labour pool already hit hard by border closures. "It's incredibly difficult," she says.

While welcomed, the intern scheme will provide only a fraction of the staff New Zealand Wineries requires for the next vintage, and as well as recruiting via "every angle we can", the company will utilise the technology of a new winery to reduce labour needs. And the level of labour will dictate what can and cannot be done, with handpicking, for example, a possible casualty of labour shortages. "We have multiple plans depending on how many staff we can recruit."

Pernod Ricard Winemakers are trialling a "hybrid" role in Hawke's Bay, split between vineyard work and the cellar over peak periods, says Peter Hurlstone, Operations Manager for the region. "For the vineyard, this is over the peak growing season from spring through until harvest, and then supplementing the winery resource over vintage, and the busy period which follows vintage, bedding down the new season's wines."

The employee gets to "try out" two key elements of the wine industry, he says, calling it a "win-win situation". Then, when permanent roles arise in Marlborough and Hawke's Bay, those in hybrid roles ideally move to permanent positions.

The model will provide a more sustainable solution to cover peak periods and ensure Pernod Ricard has experienced team members who can competently transition between roles, Peter says. "It also provides a unique opportunity for our team to develop a broad range of skills."