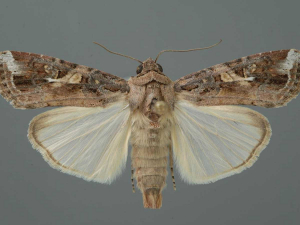 Native to the tropical and subtropical regions of north and central America, it has invaded more than 60 other countries, none of which have managed to successfully eradicate it.

Fall armyworm larvae feed voraciously on more than 350 known host plant species, with a preference for cotton, maize, sugarcane, sorghum, wheat and rice, as well as several fruits and vegetables such as sweet potato and melon. Grapes are recorded as a host, however there is little information available about damage to grapevines.

New Zealand Winegrowers (NZW) urges members to be on the lookout for this pest in the vineyard; it is not yet known to be in New Zealand, but is almost certain to arrive in the near future in light of its rapid spread throughout Australia. While unlikely to be able to fly across the Tasman, fall army worm is most likely to arrive in New Zealand via import of infested plant material, other contaminated commodities or as a hitchhiker on aircraft.

Lifecycle and what to look for

Fall armyworm eggs are laid in masses of 150 to 200 eggs. They are pale yellow when first laid and darken to a light brown prior to hatching. Eggs are laid on leaf surfaces in layers and generally hatch within two to three days.

After hatching, the larvae pass through five or six larval instars, reaching a maximum length of about 4.5cm. They are light green to dark brown in colour, with stripes running along the length of the body and dark heads.

Pupation usually occurs in the soil, but also sometimes in host plant reproductive structures, such as corn ears. If the soil is hard larvae may also web leaf debris together to form a cocoon on the surface. Pupation takes from eight to 30 days, dependent on temperature. Pupae are brown and shiny, and up to 2cm long.

Adult moths are estimated to live seven to 21 days, with females able to lay eggs from about the third day after emergence. Adult armyworm moths have a wingspan of about 3.8cm and body length is approximately 1.7cm. Males are slightly smaller than females. Wing colouring is mottled greys and browns, with males having triangular white spots at the tips and near the centre of their wings. Adults are highly mobile and can fly up to 100km at night, assisting the rapid spread.

The larval stage of fall armyworm causes the most significant crop damage when feeding. Larvae are active during summer and into early autumn and will feed on shoots, stems, leaves and fruit. Grapevines are not thought to be preferred hosts, however, in the absence of other primary food sources feeding on grapevines and fruit may occur.

Impacts in other countries

Since 2016, fall armyworm has spread to Africa, India, China and Southeast Asia and impacted many industries, attacking crops by feeding on fruit, reproductive structures, new shoots and growing points, skeletonising leaves and creating large holes by boring through kernels and cobs. In places where it has established undetected or population levels have been allowed to build up, whole crops of maize and rice have been destroyed almost overnight; badly infested fields look as though they have been struck by a severe hailstorm. Chemical control is recommended as a last resort due to the pest’s ability to very quickly develop resistance to insecticides. Integrated cultural, chemical and biological control programmes are recommended to avoid resistance development.

The first detection of fall armyworm in Australia was on the Torres Strait islands of Saibai and Erub in January this year. Within a month it had spread into other areas of Queensland, and by March was in the Northern Territory and Kununurra in Western Australia. In September/October it was found in northern New South Wales, and most recently it has been detected in Dubbo, Breeza and Maitland. The Consultative Committee on Emergency Plant Pests has agreed that it is not technically feasible to eradicate fall armyworm in Australia.  Vinehealth Australia have issued a biosecurity alert to Australian winegrowers, to ensure they are aware of this pest and to encourage reporting of any
fall armyworm found in vineyards. New Zealand Winegrowers is also in regular contact with Wine Australia and will keep members updated if there are reports of armyworm damage to Australian vineyards.

What to do if you suspect you find one

Northern areas of New Zealand are the highest risk regions for the establishment of fall armyworm – regions where temperatures fall below 9° and frosts occur are likely to be too cold, although seasonal migration can occur into cooler areas. Any crop damage is most likely to be observed during the summer and early autumn months, when larvae are feeding.

Biosecurity New Zealand says it is working with its primary sector partners after a single confirmed egg mass belonging to the moth pest fall armyworm was found in Tauranga.